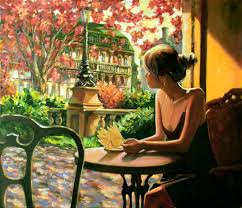 Amy remembered quite vividly the day she was told she was in fact emotionally accessible. It was a compliment and unexpected.  She met him in a coffee shop about 6 months ago, a girl who wanted something nice to happen to her, not thrilling as such, nor fantastic looking enough to come and sweep her off her feet, they were definitely still planted firmly on the ground; just!  She wanted a moment to feel what love might be.

It was the nerves today. She’d not dated for years and had a fear of the opposite sex, mainly because the one that came with her past failed miserably in all his husbandly commitments; like making the occasional sandwich and rinsing a plate.

So she sits there with her back to the entrance sipping her coffee thinking about her life and what the hell she was doing meeting this stranger who she’d met on the crossword game on her phone. They’d spoken for the last few months and she’d decided on the spur of the moment to ask him to meet for a coffee in a public place, she was quite bright like that. Totally flippant and silly sometimes, she even surprised herself, but she wanted a bit of fun and she trusted him.

Anyway, he came in and did, dare I use the cliché, sweep her of her little feet.  A handsome guy, who spoke with a confident and easy manner.  He was articulate too, with no embarrassment when taking a gulp of coffee and ending up with cream on his nose.  He took her hand because she was shaking, and he put her at ease in an instant with lovely words, that tickled her ears, whilst softly and tenderly stroking her fingers. It felt wonderful to her because the touch felt strong and caring, it had a sense of trust and friendship.

They talked and talked and she knew from that first 5 minutes there was a deep sense of attachment growing, but she became worried.

She knew that the circumstances of his life and how seeing him again would make things difficult, yet the touch of affection was just well, nice.

‘How lovely is he?’ she thought.  A guy, in his late forties, with hair! That was something else she was impressed by. She’d had an aversion to baldies from her past experience.

Well, they talked and talked about loads of great stuff.  It was a conversation that lasted a good hour and she knew they definitely clicked. She noticed the chain he was wearing. He looked into her eyes and recognised the thought behind it.

‘It’s been broken for ages’ he said smiling.

Why should you have a broken necklace, she thought, You’re a gentle, kind and funny guy, you deserve something that’s perfect.   (Silly thoughts.Pull yourself together woman!)

“I’ll have to go now and it was lovely meeting you,” she said, blushing and embarrassed.

She felt quite proud of herself that she’d met him and mustered up the courage to be herself and talk confidently, a big achievement for a naïve and tortured girl.

He gave her the most glorious squeeze as they climbed the stairs and she felt warm and loved after many years of sadness. They walked down the street amidst the bustling shoppers and he kissed her cheek, then he turned and walked away. She glanced at him and he looked at her, and they giggled.

She turned away and carried on walking, and her steps became quicker as she thought about the meeting. ‘I mustn’t ring him again, she thought. He’s wonderful but he’s taken, and I haven’t got the strength to deal with it; the pain of him being with someone else. Yet we can be friends I suppose, that wouldn’t hurt?

She picked up her phone and wrote him a little text ‘Great seeing you today and thank you. I’m free Friday evening, do you fancy a drink?………..

2 thoughts on “A Chance Meeting”