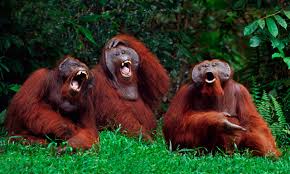 I just wanted to share some funny jokes and quotes I’ve heard and read over the past few weeks. I love laughing and some of these are hilarious. I think so anyway :))

I’m a magical fairy. You can have two wishes.

What? But I want three wishes!

Old people can’t fall asleep in their chair in peace. As soon as they start to nod off you go, “Nan! Nan!” They go, “What? What?” “Oh sorry we thought you’d just di…” (Lee Evans)

Banana: Man, can we change the topic please?

A mate of mine has just told me he’s shagging his girlfriend and her twin, I said how can you tell them apart, he said “her brothers got a moustache!” (Billy Connolly)

She: I have a doctor’s appointment today but I really don’t want to go…

He: Just call in sick then.

Are you two twins?

Because mommy dressed you both in the same clothes.

My grandmother started walking five miles a day when she was sixty. She’s ninety-seven now, and we don’t know where the hell she is. (Ellen Degeneres)

I had a knock at my door earlier, it was a policeman…

“I’m afraid your dog has just been reported to have chased someone on a bike.”

Boss: I don’t consider that a weakness.