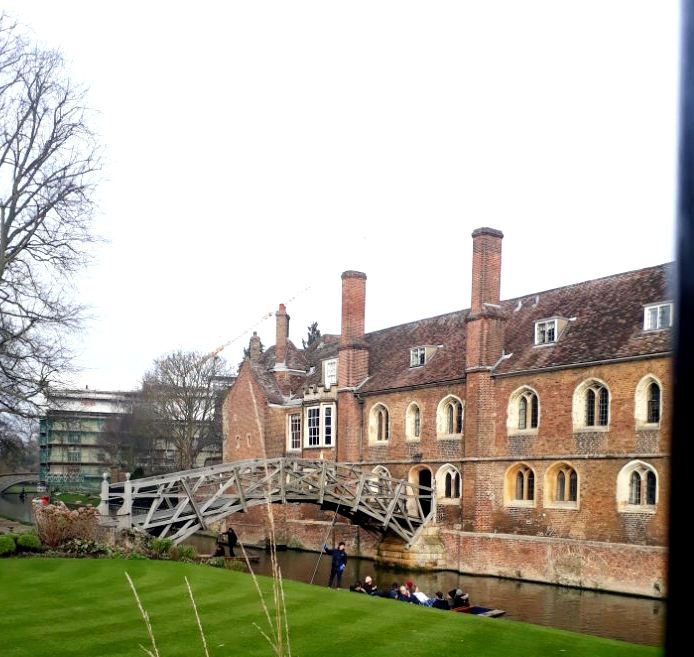 I visited Cambridge around 2 years ago and took this photograph of the Mathematical Bridge, (this is not in fact it’s official name, it’s just known as that). There’s so much history in Cambridge that I’d definitely recommend spending at least 3 or 4 days there, and taking a look at this beautiful piece of antiquity.

Back to the Bridge..

I won’t go into the technicalities of the structure (because in all honesty, I don’t really understand them), but it’s genius in design. It is a grade ll listed building and bridges the river Cam by connecting two parts of Queens’ College. It was designed by William Etheridge and built by James Essex in the year 1749. Then it was rebuilt on two other occasions in 1866 and 1905.

I cannot explain the intricate technicalities, as I mentioned above, of the mathematical construction of the bridge and design, because it involves tangents and radials, and a large amount of Physics which my brain cannot comprehend.

If there are any readers out there that would like to offer the explanation in a simple way  for dullards like me to understand, I’d be eternally grateful?

So this is what I understand. That the bridge is arch-shaped and constructed by using short straight lengths of timber. This creates an extra strong compression force, which when constructed in this way, makes the wood stronger. You can see more clearly how the timbers are assembled in highlighted colours.

I wasn’t aware of how significant the design was until I returned home and read up on the subject after having taken the photograph. It was the loveliness of the day, the weather, the setting and the history of the town that blew me away.