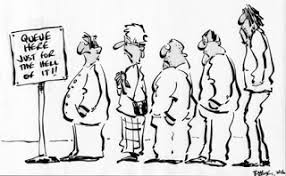 I don’t do queues. This doesn’t mean that I’m not a patient person; I have a good measure of patience when it comes to tolerating my children’s occasional misdemeanours, bickering episodes and mother related carryings on.

I have not one smidgen of patience however when it comes to queues. I will stand in a queue if I have to, but it’s just something I find very difficult to tolerate, and if the line is too long, I can’t be bothered to wait and will usually walk away. And what is it with people standing at ATM machines?  I’ve purposely done a bit of personal study on this, because I’ve too much time on my hands, and cannot understand the length of time that some people stand at these things. I’ve timed myself! It takes me on average 20 seconds to put my card in, punch in the number, press the accept or decline button, and wait for my money to pop out. Easy! Like I said, 20 seconds tops. Nevertheless, I seem to be constantly behind people who seem to know where the secret  ‘YouTube’ button is, and spend the next 5 minutes watching funny clips. Or having some sort of secret conversation with a family member on another device I don’t know about for another 3 minutes. What the hell are people doing on these things? Just draw your f*****g money out and move on!

I was in a café the other week at a local place of interest. The queue was medium sized, which I can just about handle. You just get a general feeling, if this is the case, that it will go down relatively quickly. No such luck! I was standing behind a woman that wanted half the bloody stock. All I wanted were two coffees with milk, simple as that. The queue is trundling down at a steady pace and then she decides to order, and I’m behind her. It went something like this:

Woman: “Can I have 1 latte please?” (I had a smile on my face when she said this. I thought great, this is a quick one)

Server: “Of course, anything else?”

Woman: “Two bowls of carrot and coriander soup. Oh, and can I have a bread roll with each of those?”

Server: (Looks quite vacant when asked this complex question. She then realised they were NOT on the serving section but in the back kitchen. She pops into the back for about 3 years, and enters with the bread rolls. She then serves the soup, quite deftly I may add, I’ll give that to her, and places the said items on the tray).

Woman: “How much are those pieces of carrot cake?”

(A young girl with a long-handled brush breezes; well slopes is a better word, around the corner, looking about as bright as a 2-watt bulb) “How much is the carrot cake?” Server asks.

Carla:  £2.25. (I felt like giving her a round of applause. I honestly didn’t think she’d have a clue. The 9 other queue people by this time were also impressed.

Server: “£2.25 a slice duck”. (She was not addressing a feathered bird that waddles. Actually, she kind of did, but that’s beside the point. The word ‘Duck’ is a term of endearment within certain dialects of English language usage)

Woman: “What flavours you got?”

(I knew she was going to ask this bloody question! The queue has now become at least 12 long. Don’t people realise that they are holding everybody up and irritating the shit out of us)

In the meantime, as the server is describing every stupid yogurt flavor under the sun, I ask the other girl who is standing at the end of the coffee section if I can order just 2 cups of coffee, stressing the word JUST!  This girl was doing absolutely nothing! She’s standing there waiting for the queue to go down, and ‘2′ Watt light bulb Carla, is still trotting up the edge carrying her f*****g brush.

I do a 180, and there are now at least 20 people waiting. It was an absolute joke, and it always happens to me when I’m standing in a queue.

At the end of this little escapade the woman asks for another bread bleeding roll, the soup must now be cold and we are all pulling each other’s hair out…..

And then a few days later….

I go into a KFC near to my home. I wanted just 1 snack box; an operation involving the asking, serving and the taking of my money that should be all of 3 minutes at the most; and it was. Unfortunately, I was behind a family that wanted to order the whole bloody restaurant. I was there for at least 15 minutes.

These places need a serving corner with a simple sign above that announces to the impatient ones like me, SMALL ORDERS TAKEN HERE! I think that this is a very good idea for those of us that just want to order a small cup of tea.

I’m seriously thinking of opening my own Eaterie, I’d make a fortune!

I am a mother of two children, and have had many experiences in my life that I have been through and had to overcome. I feel it would be beneficial (at least to me, and perhaps you) to share my experiences. I’d love to hear your comments and suggestions. x
jomullaney27@gmail.com
http://pipstips.co.uk/2016/12/08/intro/

The Sun’s Contribution to my Series of Unfortunate Events