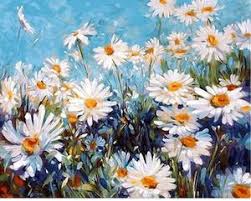 She let them go, the heart sore tears. She was sitting in the middle of a field full of daises alone, with the sun hot on her face and cried for what seemed like a lifetime. It was the memories of all the good times she’d had with him. The funny stuff; the way people would look at them in restaurants and see them giggling like a pair of kids. She never imagined it would last as long as it did. At first, there was hope it would continue, kind of false hopes with no promises.

“I’m not promising you anything, I’m doing my best.” he would say, and that was the answer she always got for her unselfish love and care, an answer devoid of affection and a recognition of her worth and what she’d done for him over the 3 years they’d been together. It was always on his terms. She couldn’t ring him when she wanted to, because his partner would find out and he couldn’t bear the thought of losing her, but  the one that truly loved him didn’t matter, she was not allowed to ring because it would upset the apple –cart and those fruits were sour!

She slowly became bitter and lost her spirit, and she wanted it back, to carry on laughing, instead of pining with tears. And she had given everything, all of herself, and became timid and afraid to question the ignorance and the feelings of being unloved. It was met with sighs and quietness. Her good nature so lovely, generous and soft was neglected after a while and was replaced with feelings of inadequacy. The messages became less to the point of non-existence and the words of love faded away.

Her friend told her ages ago “It’s pointless; you’re there for him when it doesn’t interfere with his life. Go to his house and see who opens the door. You’ll know then his true feelings. He’ll deny he even knows you if she’s there, he’ll disown you right there and then. He loves her, he doesn’t love you, he’s there with her, isn’t he?? Just walk away from it all and get treated like the precious woman you are. You deserve it. Don’t play second fiddle to another woman”.

And finally, she visited the field again, on a sunny day that was now full of fresh and new daises. The sun was hot on her face and she breathed deep and slow and felt a release. The flower on the bookmark, a lock of hair, a photograph of a couple in love on the park and the day of falling in love in the city.

But now she’d become the last on his list of priorities, yet she knew she always had been. The sitting alone wondering what he was doing at home, the pain of being apart, a shameful secret. It had become exhausting. She’d given everything of herself and got nothing back.

She picked herself up, smiled at last and finally let it go……

One thought on “She Let it Go”