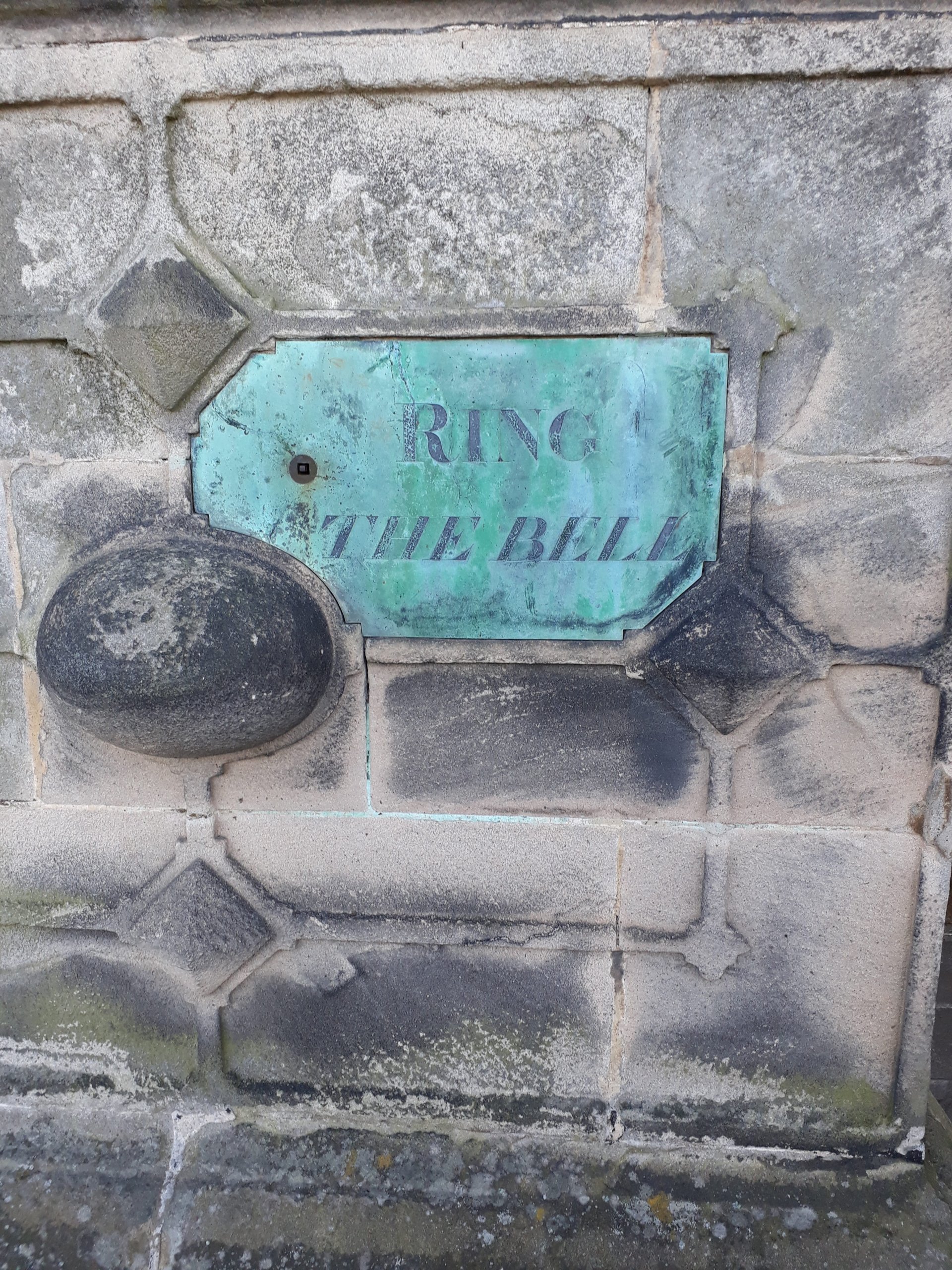 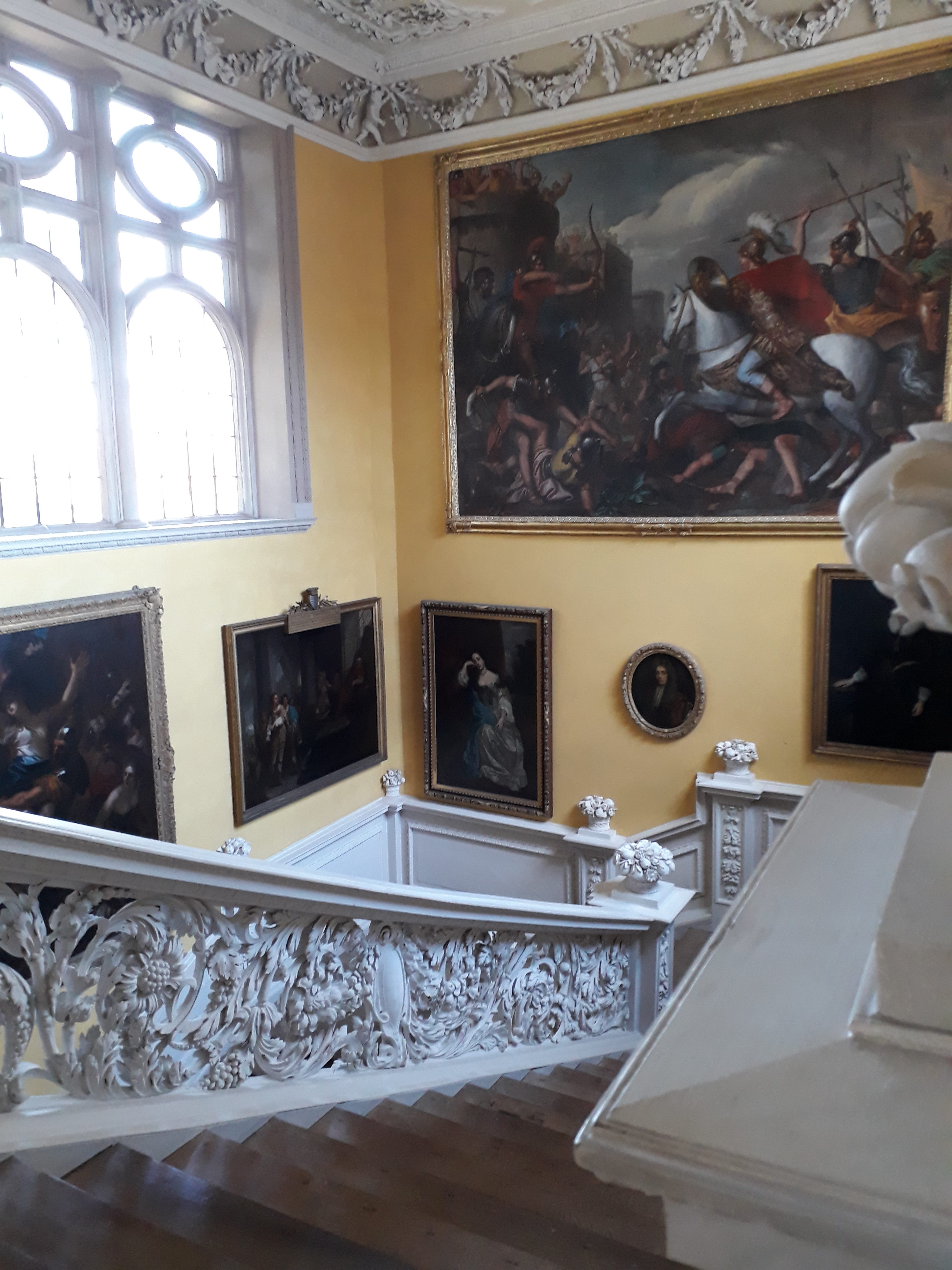 I took myself off for a visit to the National Trust property ‘Sudbury Hall’ last week because I was on holiday from work and it was half term. I am a ‘National Trust member’ so the cost of entry was just a click on my card, but if you pay on the day it’s around £18 per adult and that’s for a look at everything. This magnificent hall has extensive gardens, a lake, a museum of childhood and so much to offer for a day out. In fact, I think it’s best to provide a link as this will give a better explanation of the hall and surrounding areas.

It wasn’t until I returned home that I realised that the 1996 BBC dramatisation of ‘Pride and Prejudice’ by Jane Austen was filmed here; more exactly the interior scenes, and I wish I’d known this when I was walking around the house. I was even in the room where ‘Mr. Darcy’ emerged from his bath in the buff! or just about! I have included my own photographs of the day. It was quite overcrowded because the sun was shining for a change, but the atmosphere of the place was great and the National Trust volunteers provided lots of information as you wandered around asking questions. If you ever visit England, I definitely recommend a visit here. The surrounding village, which is still owned by the Vernon family, who were once the owners of Sudbury Hall until 1967, has a pub full of character with a pretty beer garden overlooking the house.

There are shops and old buildings to look at along the main road, an area with quaint little shops, a cafe with outdoor seating and grassy areas for children to play. There’s a play area within the hall grounds for children, and the museum of childhood, which exhibits toys from the 1700s onwards, has areas of play for little ones. It really is well thought out and a credit to the National Trust. The whole experience really does give you a full day out. 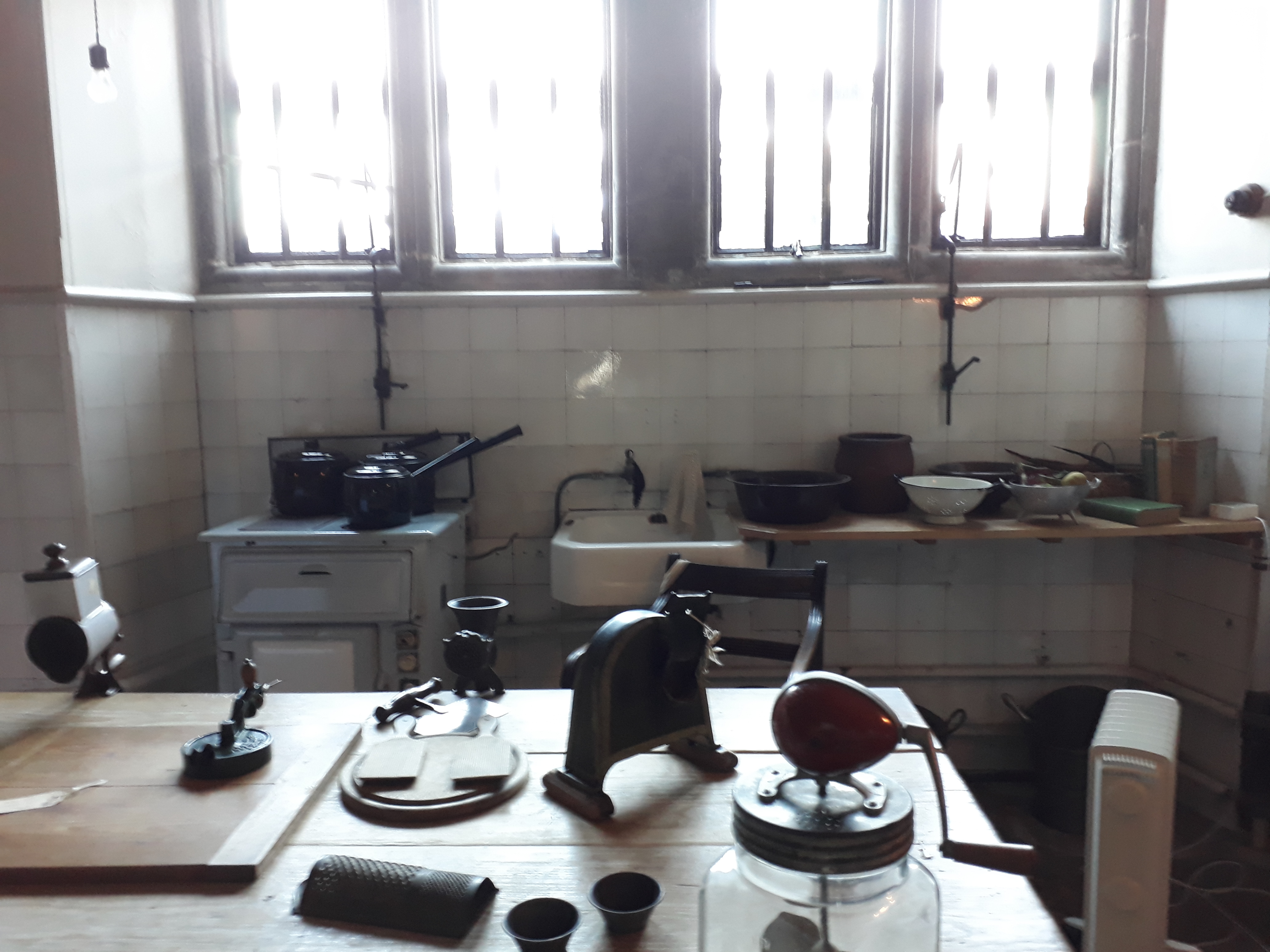 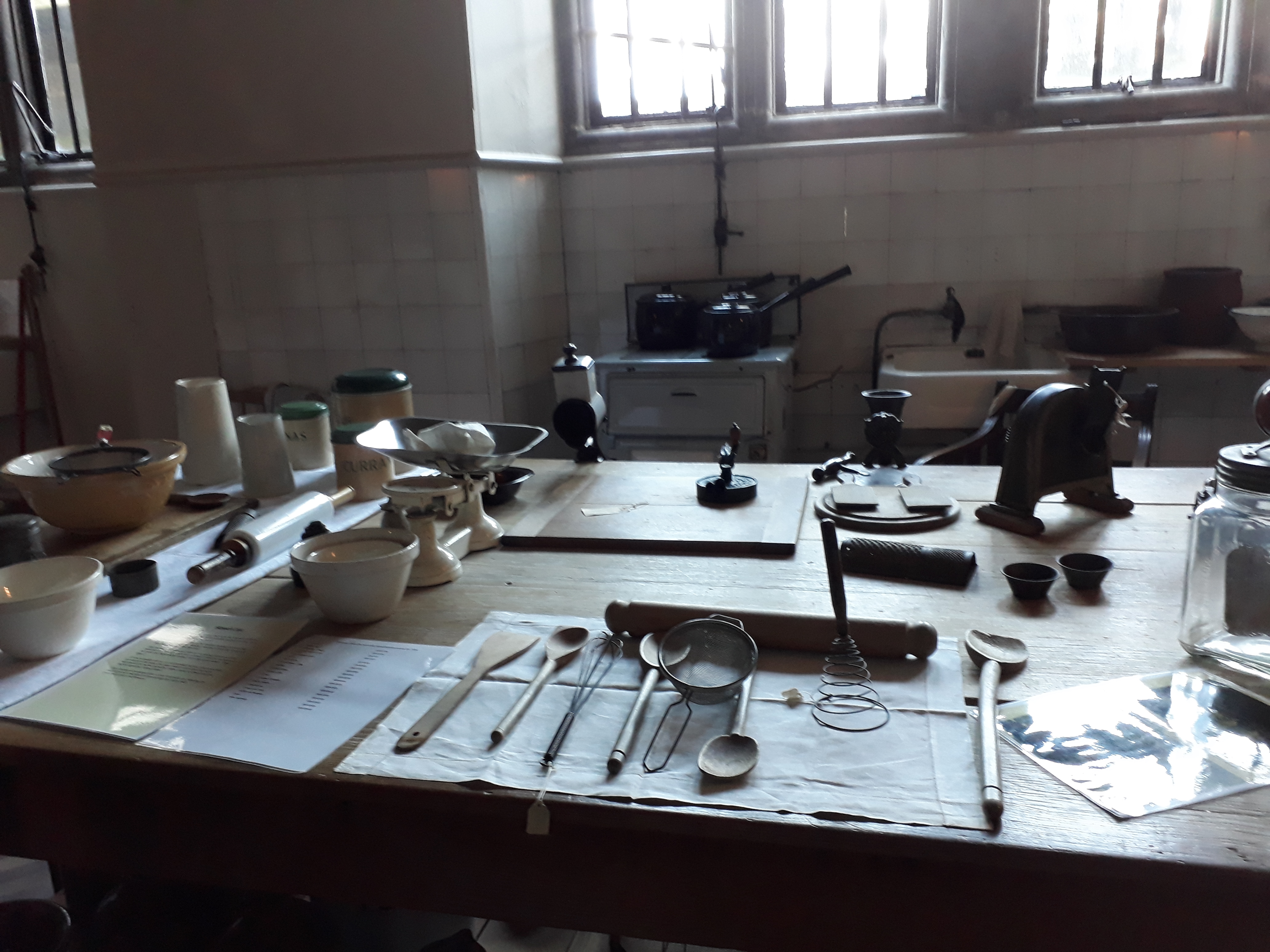 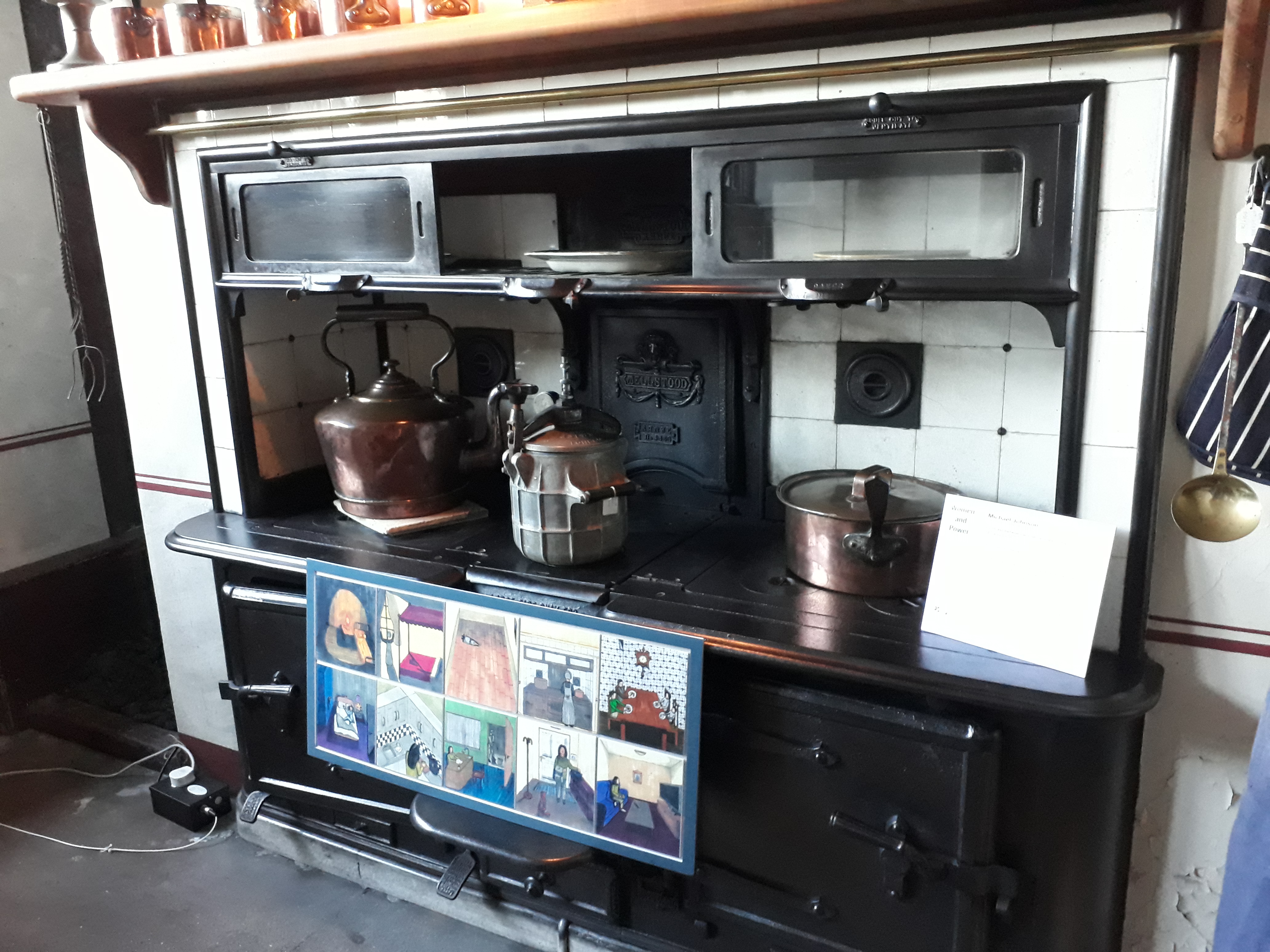 These are photographs from the kitchen. The volunteer told me that this wasn’t the original kitchen, but one that was added after the war. The reason for this was because there was a shortage of servants as going ‘into service’ was becoming a dying profession. This kitchen was smaller and more adequate for a smaller staff. 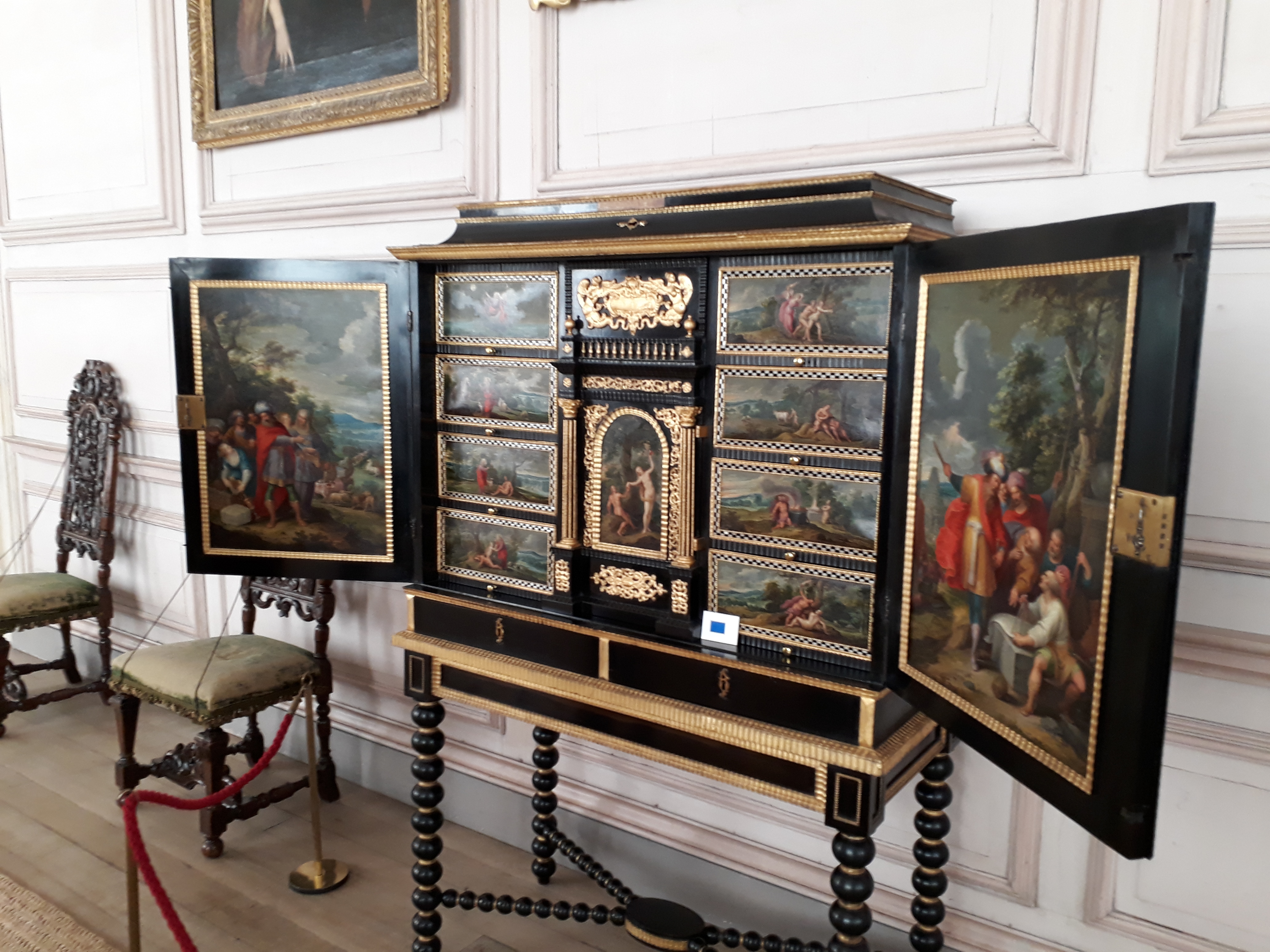 This is a piece of furniture placed in the long gallery. Upon closer inspection, on the advice of a volunteer, I noticed that it depicted scenes from the bible. The story in the centre is of Adam and Eve and their banishment from the garden of Eden. The painting on the left-hand door, as your looking at it, is the story of Noah’s ark with the characters dressed in 16th-century clothing! And the inner right door of the cabinet details the building of the tower of Babel and the confusion of the languages of the people. I had a really close look at this for quite a while because it was really fascinating to see the detail and the time it must have taken to make the cabinet and paint the artwork. I imagine its priceless.

I can’t remember which room this fireplace was in, but it was the carved woodwork around the portrait that was breathtaking. This picture is a little blurred and I apologise. The carvings are of fish and ducks. 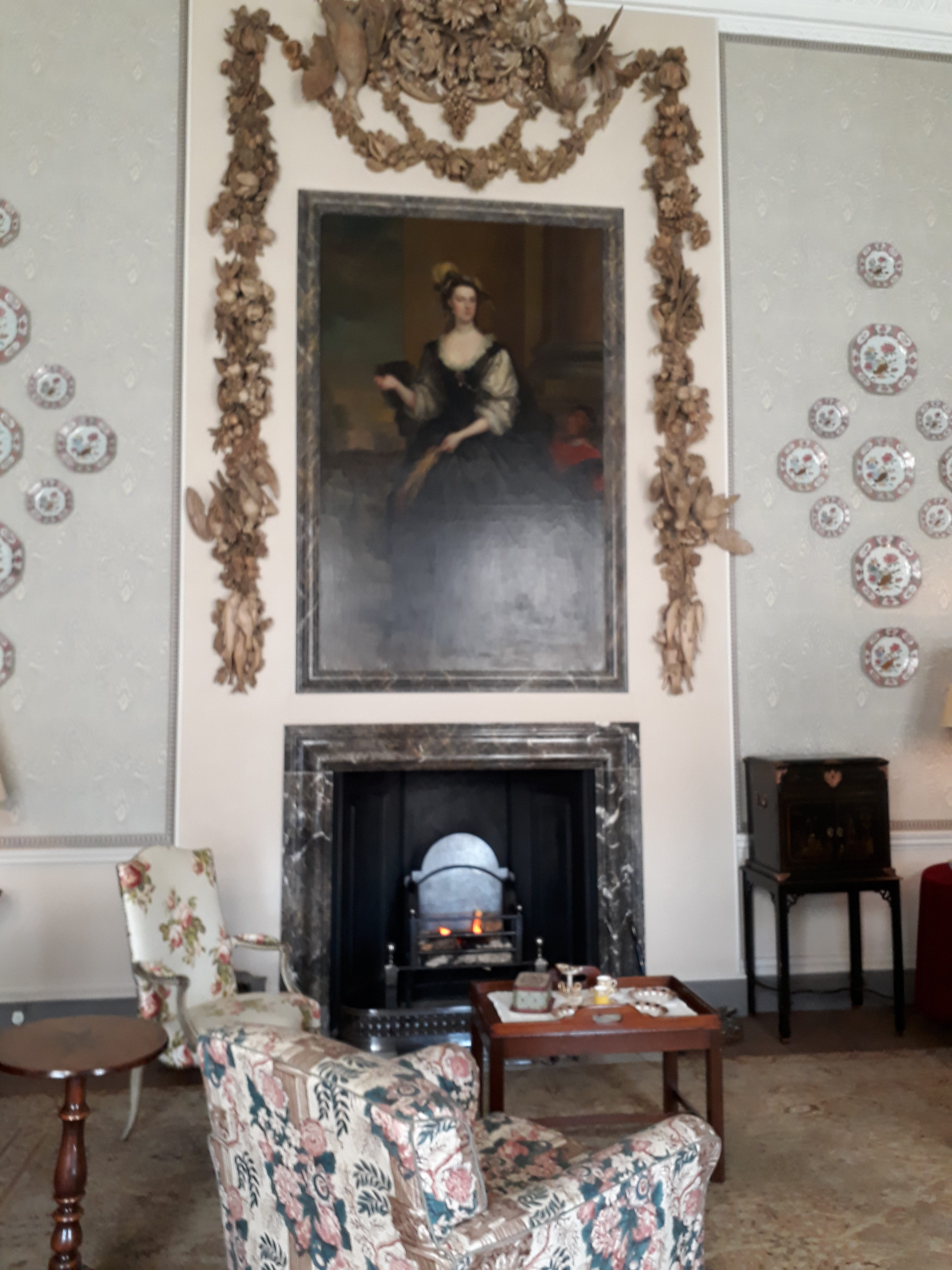 This fireplace was gorgeous and impressive. It was used in the ‘Pride & Prejudice’ adaptation as the setting at ‘Pemberley’ when Mr. Darcy and the Bingleys were discussing ‘Elizabeth Bennett’. Mr. Darcy announced to Mrs. Bingley that upon meeting Elizabeth she had grown upon him and he stated quite forcefully, ”She has become one of the finest women of my acquaintance’. God, I love Jane Austen. 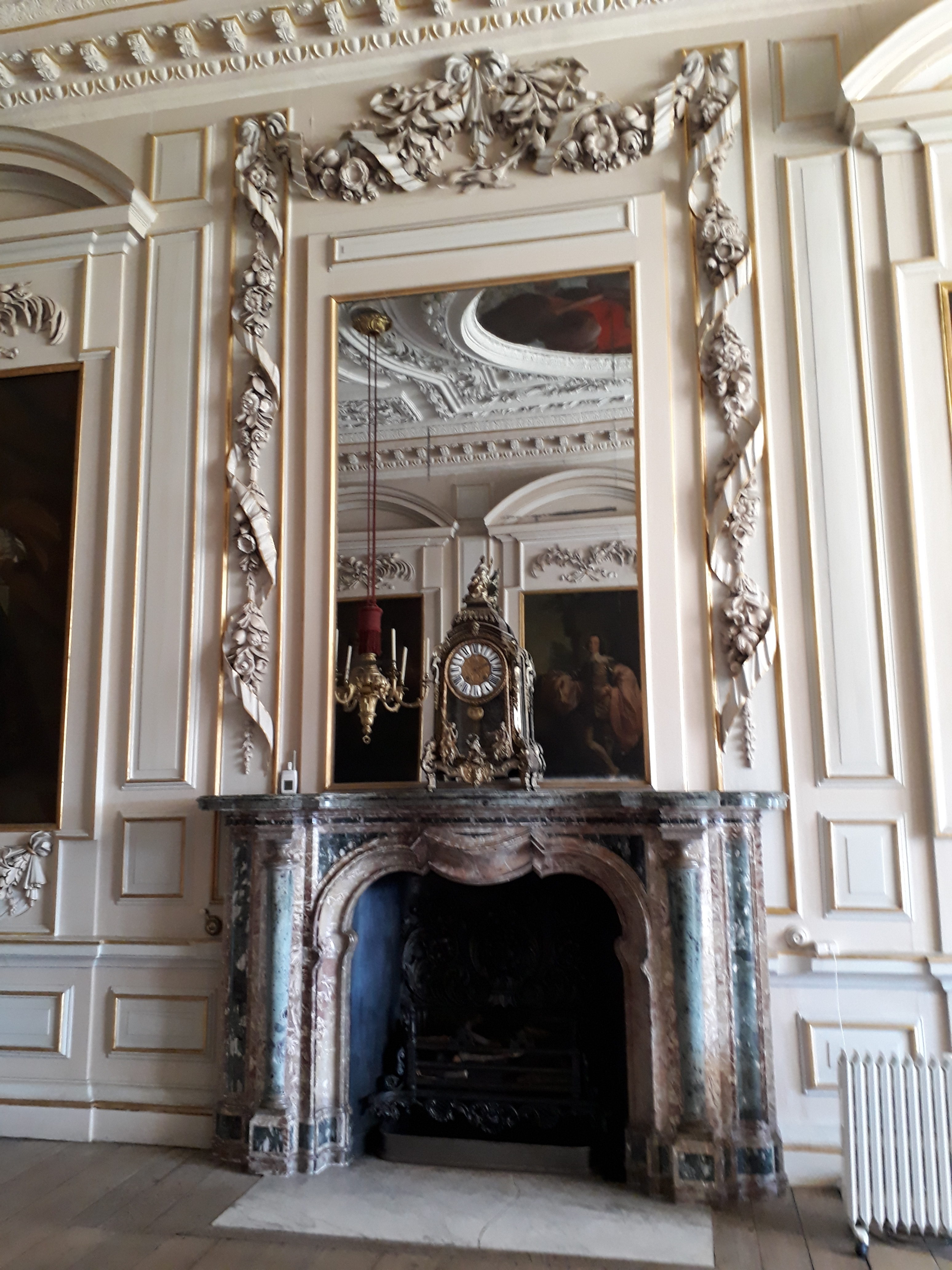 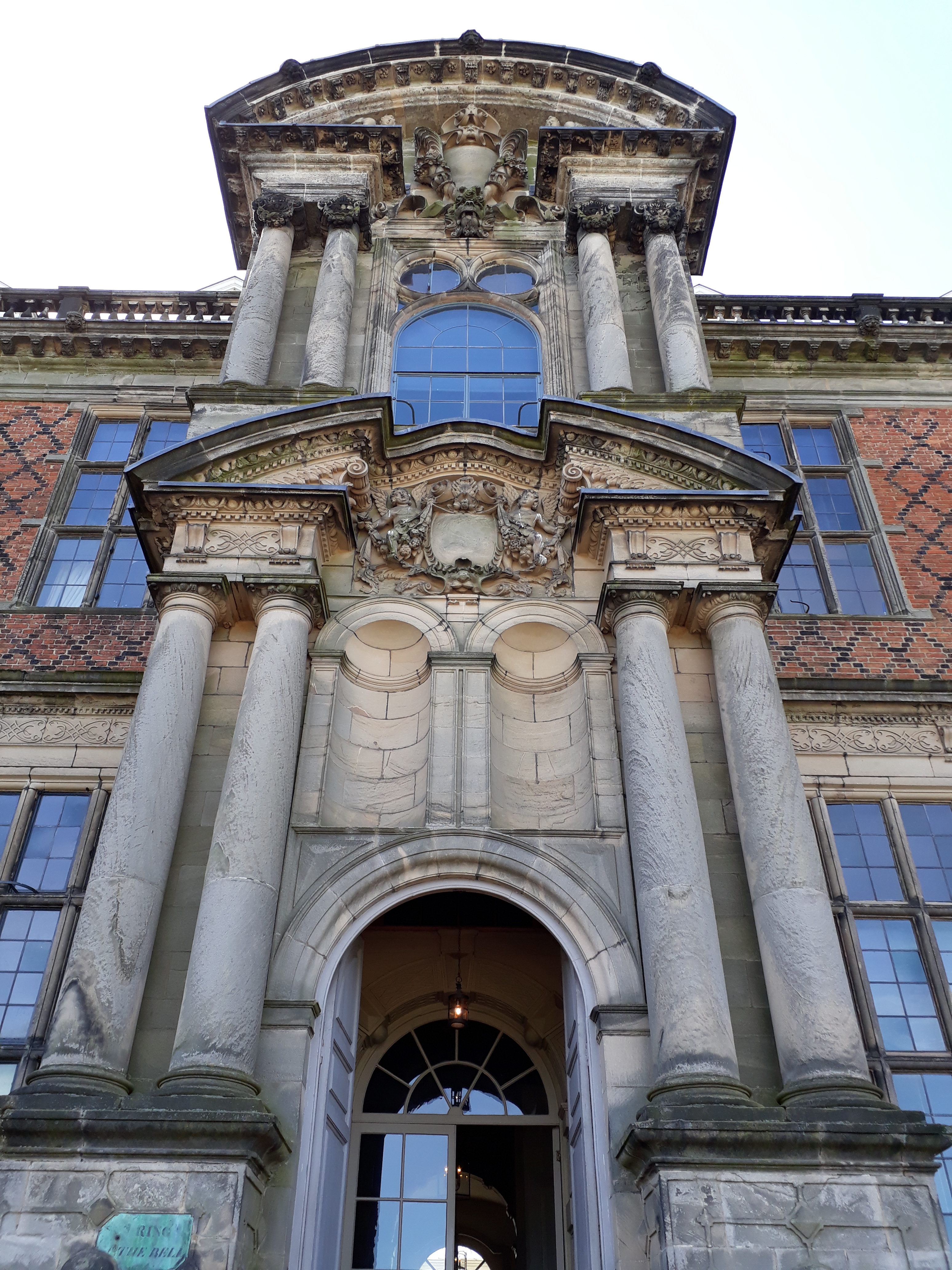 The entrance and carvings on the main entrance doorway. 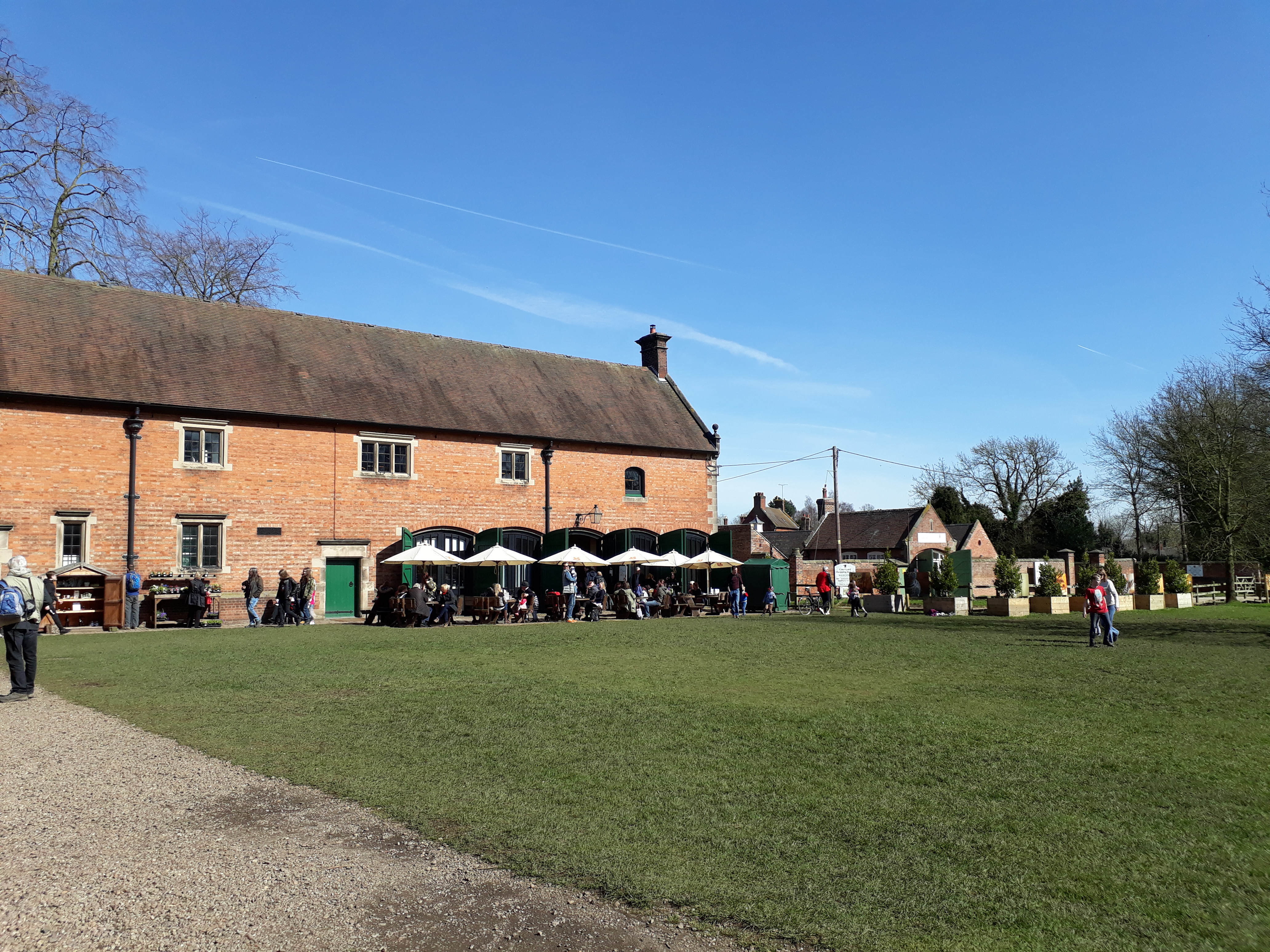 The stable courtyard showing the outdoor cafe. From where I was standing taking the photograph, the museum of childhood was just behind me and walks further along to the woodlands and gardens. 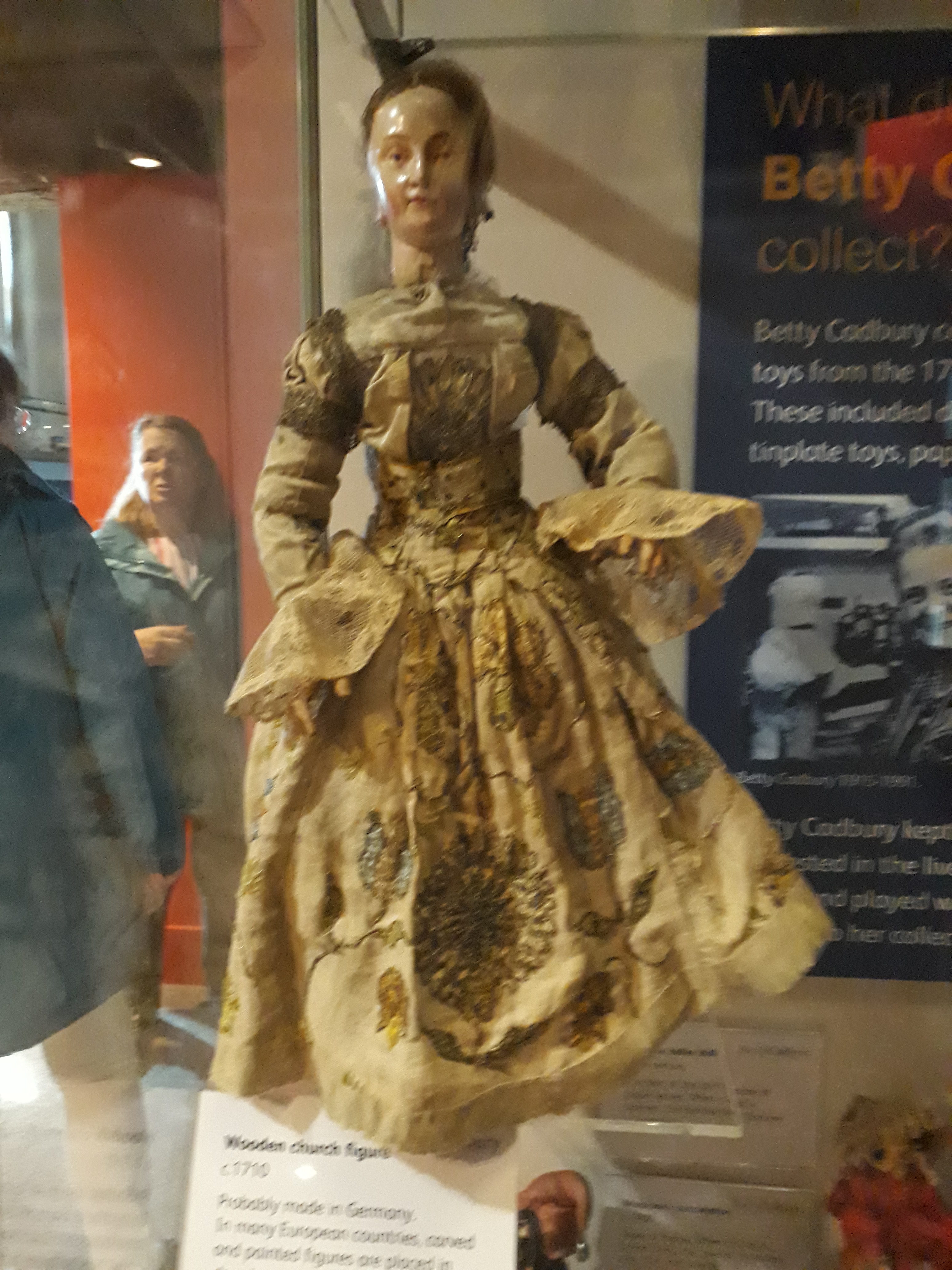 This was the last photograph taken from the museum of childhood. It’s not the prettiest doll, but if you notice the inscription, it reads that the doll was made in 1720 and is of German origin. I love old toys like this. A nearly 3 hundred-year-old doll with original clothes.

I hope you enjoyed looking at my photographs. Last Thursday was really special because there was a sun in the sky and it was cloudless. I couldn’t have wished for a better day.