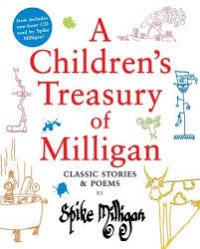 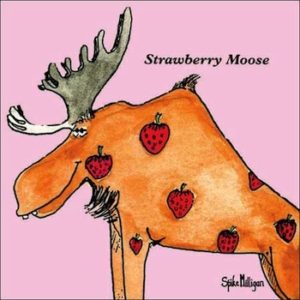 Firstly, I want to mention that I love Spike Milligan. He was a comedian, musician, poet, playwright, actor and writer. A man of many talents. He was the co-creator, writer and main cast member of the popular ‘Goon Show’, where he played the characters of Eccles and Minnie Bannister. He was also a serious writer, and wrote a seven-volume autobiographical account of the time he spent serving in the second world war, beginning with ‘Adolf Hitler, my part in his downfall.’

He is considered, besides being one of the funniest men of all time, a genius of literary nonsense. His famous poem, ‘On the Ning Nang Nong’, was voted the UK’s favourite comic poem in 1988, and as of December 2007, according to Ofsted, one of the ten most commonly taught poems in primary schools in the United Kingdom.

So, with this in mind, I would like to recommend this absolute gem of a book, aptly named ‘A children’s treasury of Milligan, short stories and poems’. I’ve had this book for around 20 years and I read it to my children on numerous occasions as they were growing up. It is full of the cleverest, funny, laugh-out-loud verse you could possibly imagine. The hilarious story of the ‘Bald Twit Lion’ had me in stitches, and I’m 46!! Furthermore, the illustrations make the stories even more comical; also drawn by Milligan.

There’s a chapter on ‘Silly verse for kids’, ‘Milliganimals’ – his take on animals with silly illustrations – and a chapter called ‘Startling verse for all the family’. I highly recommend this book for yourselves, yourshelves (good that one, don’t you think?), and your children who will undoubtedly enjoy it immensely.

2 thoughts on “A Children’s Treasury of Milligan/Book Review”

Podged up to the Eyeballs!