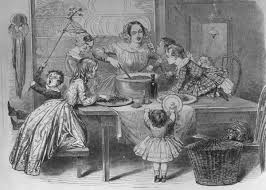 British cuisine has been the butt of many jokes. If I go out to eat, I generally choose an Indian restaurant, because I like a change and the food is appetising and spicy; it just suits my taste buds.

All worldwide cuisine offers something different. But I truly believe that English food has actually got a lot going for it. Of course, there are many slights about the way the British boil everything to within an inch of its life, and maybe that’s sometimes the case, but to me, my Great Grandmother’s cooking was the best in the world. British puddings are what I would call the ultimate comfort food. There are times I have been to a Chinese or Indian restaurant and an ‘Apple Pie and Custard’ or a ‘Spotted Dick’ would have gone down a treat!

My Great Grandmother was born in 1897. Even now though, I still remember the puddings she used to make. I’ve done some investigative work to find out about the great ones and where they come from. I hope you find this interesting, because I do x

The meaning of the name Spotted Dick is quite mysterious.

The first written recipe of “spotted dick” was found in Alexis Benoist Soyer’s  1849 book, ‘The Modern Housewife or Ménagère’, suggesting that the British have been enjoying this pudding for nearly 200 years, and it’s mentioned in Charles  Dickens’ ‘A Christmas Carol’.

While the recipe has been passed down through many generations, the reason it’s called ‘Spotted Dick’ has been lost.  The name does cause people to giggle obviously, so here are some of the reasons why the pudding might be named as it is.

“Spotted” refers to the dried fruit such as the currants in the pudding. This makes sense.

“Dick” may be a “corruption of the last syllable of pudding,” a “corruption of dough,” or a reference to the German meaning of “dick”. In the 19th century, “Dick” was also associated with abbreviations for a dictionary, an apron, a policeman, a riding whip and had been slang for a gentleman’s protuberance for centuries, but there’s no way to be sure where this term comes from.

Still, it is a beloved British pudding, and remains on the menus of many fine English restaurants.

A pudding that has quite basic ingredients such as bread, custard, jam and meringue, yet it has a very grand title.

The Queen of Puddings is thought to have been adapted from a 17th century dessert called ‘Monmouth pudding’, which was made from breadcrumbs boiled in milk. It was a staple meal for the poor, using up leftover food and stale bread.  Later, in the 19th century, the ‘Manchester’ pudding was created.  It has been said that when Queen Victoria visited Manchester on one occasion, she tasted the pudding and loved it so much that the chef who cooked it renamed it the “Queen of Puddings” in her honour.

It had humble beginnings yet it is a well-known and loved pudding, seen on many menus.

Parkin is more of a gingerbread cake than a pudding, and is made with oatmeal and black treacle.

The first mention of the cake was in 1728, from a Yorkshire Court session involving a woman called Anne Whittaker, who was accused of stealing oatmeal to make Parkin. It originated in northern England, before becoming widespread throughout Lancashire. It is traditionally eaten on November 5th, Guy Fawkes night, and is eaten primarily during the winter.

Parkin is related to ‘Tharf’ cakes(!), which were unsweetened and cooked on a griddle, rather than baked in an oven. The reason it was eaten mainly in the winter is because the oat harvest at the start of November was completed, and so the cakes were made from the ready supply of oatmeal.  In the 17th century, sugar began to be imported from the Caribbean, so the recipe changed to include treacle.

I have never personally made Parkin, but I intend to. A future article on the recipe is therefore inevitable.

Rice pudding, in one form or another, is eaten universally. It is a staple dish in China, where rice was first cultivated. In the UK, ‘proper’ rice pudding is a traditional and very popular dessert.

British rice pudding dates from the Tudor period, with one of the earlier references dating from 1615. It is usually made with ‘pudding rice’, milk and sugar. Pudding Rice is similar to Arborio rice, its grain round and short, and when cooked, produces a creamy consistency. I remember my grandmother making it, serving it with a sprinkling of nutmeg. She baked it in the oven until a skin formed on the top, yet it can be made in a saucepan on the stove.

My children love it with a spoon of jam in the centre, which they stir in making the pudding pink. I tend to buy the popular brand in a tin called ‘Ambrosia’. Mmmm.

And she won’t eat her dinner – rice pudding again –

This is a savoury pudding rather than a sweet one. It is made with flour, eggs, milk and water, and was first mentioned as a dripping pudding in the book ‘The Whole Duty of Woman’ in 1737. The reason for the name was because cooks in northern England devised a means of making use of the fat that dropped into a dripping pan, to cook a pudding made of batter, whilst the meat roasted.

It is the same batter that is used to make pancakes on  Pancake Day (Shrove Tuesday), when the mixture is fried in a pan on the hob rather than baked like a Yorkshire pudding. They were already being made for centuries as a flatter pudding, but it is now considered more delicious if they rise as high as possible. They are usually served with a roast dinner and vegetables. My mother, as a child, used to eat them spread with butter and sugar after the main Sunday dinner. I like them spread with jam!

A pudding consisting of buttered bread, layered in a dish and covered in dried fruit. It is then covered in a custard made with eggs and milk, and then baked in the oven. The first bread pudding was called ‘white pot’ and used butter and bone marrow. These also could include rice.

I have never made bread pudding, but I have enjoyed eating it. It is a recipe that is considered a little un-glamorous and old-fashioned now. ‘Greggs’ sell slices of it for 70p, to be eaten cold like a cake, which are actually pretty good.

Eton mess is an English dessert. The current recipe features strawberries, whipped cream and broken up pieces of meringue. It was first mentioned in 1893, and is believed to have originated from Eton College, at Windsor in England. It is served at the annual cricket match against pupils from another public school, Harrow. In the 1930’s, a version with bananas and ice-cream was served in the schools ‘tuck’ shop – the meringue was added much later.

It may be named a ‘mess’ just be because the pudding does look a bit of a mess, but no one really knows why.

I suppose it is regarded as a posh pudding. I have never tried it, because I don’t like strawberries or cream. Clearly, this is not the pudding for me!

This one is universally adored, and for good reason. It’s a suet-rolled pudding that is spread with jam on the inside, looking very much like a Swiss roll, which is then baked or steamed. It was known as ‘shirt-sleeve’ pudding, because it was often cooked inside an old shirt sleeve! At times, it has even been referred to as ‘dead-man’s arm’ or ‘-leg’!!

This one is nostalgic for many adults, as it was very popular 30 or 40 years ago as part of British school dinners, covered in custard. Mrs Beeton’s book of Household Management includes it as as ‘Roly-Poly jam pudding’, so it must be quite old in origin.

Again, my grandmother used to make it, wrapped in a linen cloth and steamed on the hob. It was wonderful, of course – my absolute favourite! YUM! 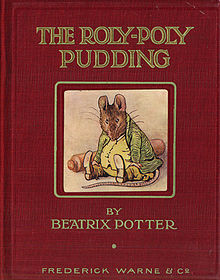 To the left is the book cover of  ‘The tale of Samuel Whiskers or the Roly Poly Pudding’ written and illustrated by Beatrix potter, 1908.

Well, I hope you enjoyed this little article. Are there any puddings that are nostalgic to you?