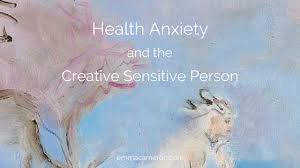 Health anxiety is a condition that is sometimes seen as similar to OCD.  Those affected by this condition have a preoccupation with their health and that they are suffering with a serious illness. The most common anxieties tend to centre on AIDs, Cancer, heart disease and illnesses that could be life threatening. In a sense. it’s like a phobia where a person fixates on an aspect of their body that they feel is a serious health problem, yet often it is harmless. They can self-diagnose and spend hours searching the internet or books about the perceived illness until it becomes tiring and debilitating. If a person has chest pains, they can automatically think they are having a heart attack, even though aches and pains are a part of normal life.

I wouldn’t like to call this post an interview, more of an open conversation with a trusted friend who has agreed to talk about her health anxiety. I thank her here for this because it’s something that, as she told me, is a little embarrassing for her, but she wants to share her experiences because there’s not a great deal out there for health anxiety sufferers and she wants to help others that are maybe silently going through this draining anxiety condition.

Pip…So how long Kate have you been suffering with health anxiety, and have you had a diagnosis?

Kate…I had a diagnosis with this about 5 years ago and it comes and goes. Generally, something triggers it and the condition becomes all-consuming and tiring. I am taking Citalopram as an anti-depressant and my dose has been increased because I had a bad episode about 3 weeks ago. I am slowly starting to get better, but it’s been a difficult time. I’ve lost a stone in weight, not slept and have felt so sad and depressed.

Pip…So what happened 3 weeks ago? Did you have a trigger?

Kate…Looking back now, yes I did. My mum’s partner died of cancer, who I had a great fondness for. My mum was going though a large amount of grief, my supply work had dried up because I work in schools and they were on their 6 week summer holiday (giving me more time to think at home and not keeping busy), and I was dealing with grief in many forms.

I remember quite well it was a Saturday morning about 3 weeks ago. I had been looking after a cat for someone and got bitten by it. Apparently, cat bites can be risky as they can carry diseases and stuff. So me being me, rang the NHS helpline, and they told me to pop down to my local walk-in centre to have a consultation within 12 hours, which is what I did. I was put on a weeks course of antibiotics, but they couldn’t give me a tetanus booster because they didn’t have them at the facility.

So I began to panic! I waited for the Monday morning, having a truly horrid weekend thinking I was going to get tetanus (which is actually quite rare, unknown to me). Anyway, I go down to the doctors Monday morning and asked for one, which they gave me as a precaution. And then everything just escalated out of control, and that’s whats so strange about health anxiety, it’s hard to describe the emotions and thought processes behind it.

I had a bad week, I must admit. On Monday afternoon, I got stung on the foot by a wasp, and by god it was bloody painful. I never even waved my arms around and provoked the little bastard, it just had it in for me. In the evening I was trying to get to sleep and it was terrible. The pain in my foot was excruciating and it didn’t feel right. I was sweating, couldn’t sleep and my foot was burning. So getting myself into a bit of a panic, I rang the NHS helpline. I was having palpitations (rapid heartbeats), so they advised me to pop down to my local A & E. This was about 3.30 am, and I was alone and scared.

During the next 5 hours I was given an ECG, blood tests, another ECG because my first was shaky, and I was laying on a bed in the department trying to relax. My heartbeat was off the scale, my blood pressure was way above borderline and I just couldn’t calm down . I was laying on the bed in tears thinking I was dying and I was alone, feeling unloved and worrying about my sweet boys at home. The outcome, after what seemed like a lifetime of waiting was that my heart was OK, my blood tests were normal, but I had chronic anxiety. I felt out of control, tearful and desperate for a hug. I remember walking thought the hospital at 7.30 in the morning, thinking about my life and how I could possibly carry on feeling this way. It was making me so sad. I was alone and needed some love and reassurance.

Pip…So what are your circumstances then. Do you have a partner? kids?

Kate…I was divorced 3 years ago and I have 2 teenage boys. My life is my kids, and I feel very protective of them, so much so, that I worry about something happening to me and that they will be alone, even though they have a good relationship with their dad.

Kate…Unfortunately not, at that point. This feeling of being alone was playing on my mind and I was questioning what I was doing wrong with my life and why I was so obsessed with dying. That’s what it is, the feeling of dying. I don’t want to die. Nobody does, I know, and I have this feeling that if I do, I want my children to be independent enough to have their own lives and it will be easier for them to cope.

Kate…Yes. A big thing, something that knocked me off my feet. I was at work one afternoon, it was the Friday, and I felt my neck and it was swollen on both sides, ( It could have been a side effect of the tetanus booster, but I just don’t know)  I kept rubbing it, which made it red and after work I was panicking like I don’t know what. I did what many health anxiety sufferers do, looked on the internet and the word cancer came out straight at me. I was convinced I had swollen lymph nodes, therefore, I now had cancer and my time was up. I took myself down to the doctors having a panic attack, heart racing again and feeling like shit. My week just before this had been awful. My depression had hit an all time low, I wasn’t sleeping, sweating through the night, couldn’t eat, couldn’t concentrate. I felt that my life was so unbelievably hard to cope with. It’s really hard to explain to someone how depression and anxiety makes you feel if they have never experienced it.  It’s like a black feeling of not really being here, like a fog, really hard to express.  To feel unbelievably low; and the smallest everyday stuff that we do daily seems so hard. Hanging out the washing, walking the dog, cleaning the house, it all seems too much.

I had the all – clear from the doctor, and was told that the only thing that would help me was not, in fact, increasing my medication, but to start counselling using a technique called CBT or Cognitive Behaviour Therapy. Apparently, this really works because it challenges your irrational thought processes and enables you to think differently and not to centre on distressing thoughts and  feeling that the slightest twinge or pain means you have a serious illness.

Pip…Have you any idea when this started?

Kate...Kind of, yes. I remember my dad had health anxiety when I was a child and his depression was quite bad. My depression and anxiety started definitely after I had had my first baby. I had a traumatic birth, where his life was in danger and from that point on I’ve been very concerned about being there for them both. So the health thing started around this time. I became pregnant with my second child and during the pregnancy I had severe ante-natal depression, yes not post-natal. I had a terrible problem with it. The depression was so bad I felt I was on another planet, like a brain fog. Really hard to explain. Even though the pregnancy physically was without a hiccup, my mental health was in tatters. I was so unwell. It definitely continued from this point. So for 17 years, on and off, I have been on medication to ease my symptoms.

Pip…The big question though Kate is are you getting any help?

Kate…I am, yes. I start CBT therapy in a few weeks. I’m a little apprehensive but I really need some help with this. I don’t want to keep feeling obsessed with feelings of ill health. I know deep down it may be irrational thinking but when you are going through it, your mind is set and you can think of nothing else. It is definitely an illness that needs nipping in the bud.

Pip…I’ve heard that you can have symptoms of stuff that can mimic real pains, like chest pains. Are they real?

Kate...Now this is the feeling that I couldn’t quite get my head around, and for real, yes this health anxiety does create physical pain. Your body becomes so tense and on edge that your muscles tighten and you feel real symptoms of stuff. That’s why many people that have chest pains end up in the A & E department, thinking they are having a heart attack; it’s a panic attack.

I’ve experienced all of these symptoms, and they are very real:

I asked my doctor about all of this stuff because it seemed unreal that anxiety could cause it all. He assured me that the adrenaline in your body creates that much tension that you can feel real physical symptoms. These things can also occur out of the blue, after periods of anxiety and can take a long time to go away. I am currently coming down from this really bad episode, yet I still have a shortness of breath feeling, tight throat sensation and apprehension. But it’s slowly getting better.

I thank Kate so much for talking about this condition she has, because as I mentioned before, it’s not necessarily a subject that people want to talk openly about. There’s not much information out there either she found, but felt that by discussing the issues it may alleviate the stress and anxiety for people out there that may be experiencing the same problems. As she said to me, if you’re feeling this way, go and have a check up with your doctor and believe what they tell you. These people are professionals who know the facts. Do not self-diagnose, it will terrify you. Do not go on the internet and google your symptoms, this will terrify you. Get the proper help from the health professionals, which will usually involve talking therapy and try and recover by relaxing and taking exercise, relying on friends for support and using the help on offer.

Kate has agreed to give us an update on the start of her CBT therapy, and how she’s doing with this.

Do Not Rely on Someone Else for your Happiness!

6 Ways to Control a Panic Attack