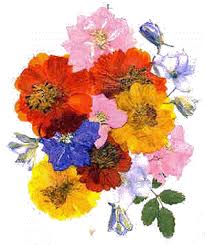 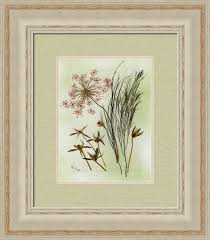 On a balmy day in early May last year, I was sitting on a beautiful park surrounding by some of the most beautiful countryside in England. My sweetheart walked over to some wild purple flowers, picked some and gave them to me. It was such a sweet gesture.  As I am a hopeless romantic I was determined to keep them. Him, not so much.

Years ago, when I was a little girl, I recalled a time I was at my grandmother’s, and we were looking through a box of old photographs, pictures and such. I found a little book of my great-grandfather’s. I cannot remember what it was called, but inside was a small pressed flower. My grandmother said it was very old and he had given it to his mother, as a child.

When I got home with my ‘sweetheart’, I knew I had to save the memory. I placed my flower inside a heavy book and left it for a month or so. When it was dry and preserved,  I made it into a bookmark, wrote the date on the back, and covered it with sticky-back plastic to protect it. I’m hoping it will last forever.

The craft of pressing flowers and leaves has been practiced for aeons. It’s has been an art form in Japan for many years, where it’s known as Oshibana, and it’s also popular in China. Ideally, it involves putting the flowers in a wooden press. It gained popularity in England during the Victorian era, with Queen Victoria herself making many pressed flower pictures which are kept in scrapbooks in the Royal Archives. Pressed flowers and leaves can be used in a variety of projects, as you can see from these examples:

This picture was made by Queen Victoria in 1897. 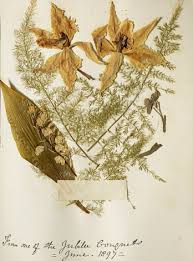 Creating these works of art at home can be an enjoyable pastime. You just need to pick a few wild flowers and leaves or buy some blooms that you particularly like. Do not pick the flowers in the morning when they are covered in dew – later on in the day is better, as they will be dry before you begin. Place them in the centre of a book between two pieces of tissue paper, close the book, and pile some more on top. After a few days, you can check the flowers and replace the tissues in case there is any additional moisture. Leave them for about a month, and then remove them with tweezers,  as they will be quite fragile.

The pressed flowers and leaves can be used in a variety of craft projects. I think it’s a lovely idea to make gifts for people that are quite personal. You could write a poem and arrange some wild flowers around the edge. If you’re not very creative, it doesn’t matter when making these; it’s just a matter of keeping your work simple and arranging them in an eye-pleasing way. If you make them yourself, they make very personal gifts that can be kept for a lifetime.

These bookmarks are very pretty. Someone has pierced some holes around the edge and threaded some ribbon or similar material to create a really lovely effect.

Now that Spring is just around the corner, I noticed this morning that the wild crocuses and daffodils are starting to come through in the fields. I’m going to pick some soon, and make a pressed-flower picture as a gift for a friend. I will post my work to show how it turns out.

If any of my readers would like to do the same,  it would be lovely if you could post your work or let me know how you got on. This is quite new to me too,  and it would be nice to share ideas.