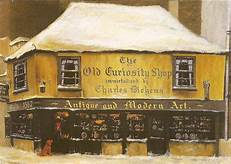 I have just finished reading the most wonderful book. The old curiosity shop by Charles Dickens. This has got to be my favourite novel of his, which is difficult to say considering that only a while ago I read David Copperfield and felt the same way. The story kind of centres on Little Nell and her Grandfather that live in the curiosity shop, but through the grandfathers gambling habits, they become homeless and wander aimlessly for miles meeting characters who help them and provide shelter. I really enjoyed the way the little stories come and go describing each of the lives of the ones that were somehow connected to these two initial characters.

Quilp, the tyrant dwarf, who disliked everyone, even his poor suffering wife; who ate eggs with the shell and all, and downed liquor piping hot from the stove, gave the reader the vision of an in-human bully which he certainly was; a money obsessed man with not an ounce of conscience. The way Charles Dickens described his character was skilful and gave the reader a sense of observing a mad-man, whilst creating humour at his appearance and character.  His eventual demise is seen by the carryings on of the attorney Sam and his sister Sally Brass, and their new employee Dick Swiveller, the clerk who found it far more enjoyable to potter around all day doing nothing much but carving into the desk and daydreaming. He had a true heart though. and played a part in the eventual saving of their downtrodden servant who never saw the light of day. The beautiful Marchioness.

Kit was a good character, having an agreeable relationship with the old man and little Nell. He was given a respectable job with Mr and Mrs Garland, and had the only masterful quality necessary to reign in the wayward pony who had a tendency to trot or gallop along at will, and stare for quite a time at the fire hydrant located in the street. The pony was my favourite character.

The beginning of the novel I found a little slow, but that can be the way with Dickens as he establishes his characters and settings. It did pick up a pace after the first couple of chapters and then I couldn’t really put it down. The thread of the story involved Nell and her Grandfather, their trials and her Grandfathers love combined with his selfishness towards his granddaughter. It was quite sad, in parts, yet I hoped that the conclusion would be positive. I won’t continue because I’ll spoil the story but if you fancy a book for Christmas then ‘The Old Curiosity Shop’ will be an excellent choice. x