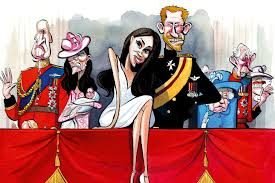 I’ve been thinking about doing this post subject for a while now, and due to the incessant news and television coverage of late, is has prompted me to do so. As you are now probably aware, I live in Britain, and there is one part of this country that many people have affection for, and that is ‘The Royal Family’.

From my earliest memories of having opinions about stuff, I have never considered myself to be a monarchist, and my reasons are personal, yet I do respect a persons right to like the establishment and what it stands for. It’s always been there in the background for me, something I am not remotely interested in and never will be, yet the coverage on the news has been relentless over the past year since Meghan Markle came on the scene.

Kate wore a cerise dress to the wedding.

Fergie is back in the royal fold.

Meghan the Duchess of Sussex wows in a leather skirt.

The Queen goes to church with her granddaughter.

Prince Andrew goes horse riding the day after the wedding.

The Countess of Wessex looks lovely in blue.

Kate’s new hairstyle… and it goes on, and on, and on….

I know people are interested in these news headlines, but I am sick to death of seeing and hearing about it. If you live in Britain you cannot get away from it, the constant news about what the Royal family are up to. And since Prince Harry announced his engagement to Meghan Markle, there’s been something about them in one form or another nearly every day. The build up to the wedding, the wedding, her mother meeting the Queen, her father’s and sister’s interviews, Meghan’s cook book, her constant outfit changes when visiting Ireland and the vast amounts of money the clothes are costing. And then it’s been Princess Eugenie’s wedding, the build up to that, the 2 million security outlay paid by the tax-payer, and the great and the good flashing their wealth.

So after all of this you would imagine that the media would give us all a break; but no. Harry and Meghan have just arrived in Australia, so we will get 10 days of news about their visiting charities there, which lets face it is all that they do; and the constant pictures of her expensive clothes which apparently she’ll change into 3 times a day. And may I ask you; Is this constant show really necessary?

So here’s my view. The Queen may have her place and many argue that she brings tourism into the country, and that may be so, nevertheless, so many other things bring in tourism. Beautiful countryside, history, castles, stately homes, Scotland, Wales and London etc. Is the amount that’s given to the Royals really justified? What about all the minor royals, like the Queen’s cousins that live in Kensington Palace that perform no royal duties, yet are looked after in grace and favour apartments. Is this necessary?

Well they do a lot of good by supporting charities, people will again say? But lots of people do a lot of good in this country by supporting charities, do they get a mention? Do they get thousands of pounds a year for doing so?  And additionally, I’ve  always wondered about the amount of security that’s needed if a royal family member visits somewhere for charity reasons or to open a building etc, it must cost a fortune. Is it worth it? Does the charity benefit from it?

The Royal Family is an unelected institution that is loved by many people the world over, and if you are one of those people then I respect your right to that opinion. But I don’t share that opinion and I never will. They are no doubt lovely people and represent a good family unit, but it’s the institution that I’ve never agreed with.

And after hoping the 10 days of the Australian tour will soon be over, and the media will give it a rest for a time, it’s just been announced that Meghan Markle is now expecting a baby, so a big congratulations to them both, because that is really a beautiful time to look forward to, nevertheless, for the next 7 months, that’s all the news will be about.

What are your views on this? Or am I being a irritating sour puss? x

7 thoughts on “The Royals”