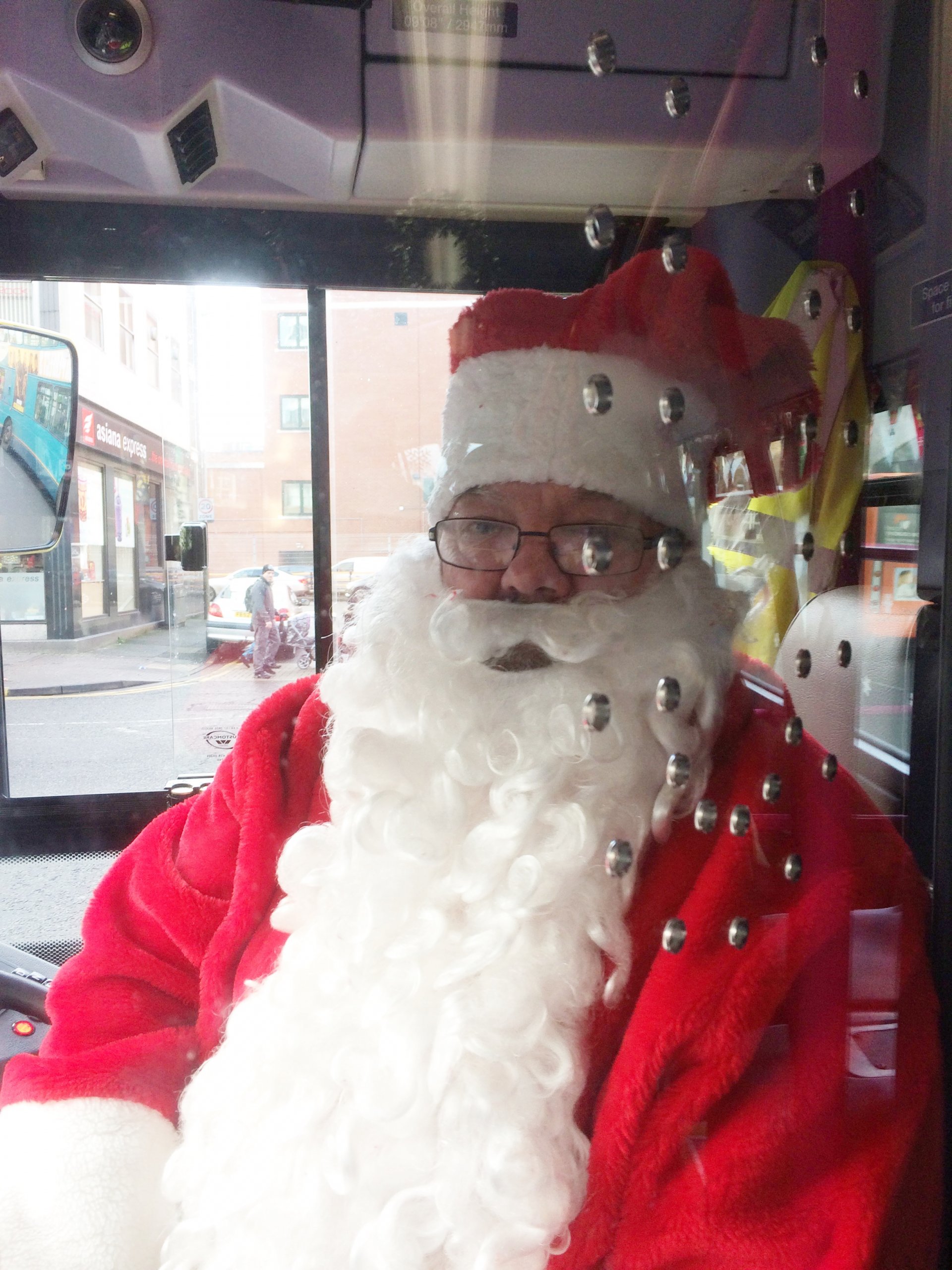 I caught the bus today to pop into town. I usually go in my car, but I wanted a few drinks because it’s Christmas and I knew I wouldn’t have to worry about getting home after having a few. When the bus approached, I had to adjust the squinting of my eyes because I had forgotten my glasses and I needed confirmation that it really was Santa Claus that was driving the bus, accompanied by his helper the Elf giving out sweets to all the children boarding. It was really sweet and  Santa announced that he had taken time out from his busy schedule to drive us all into town today to raise money for Prostate Cancer. Well, lots of us put some money into their bucket as we disembarked and it was just such a lovely thing to witness. The bus was decorated with tinsel and bunting and all the kids were happy and eating lots of candy canes etc.

Midway through the journey, whilst feeling fuzzy and happy inside, I reflected on why I think the city in which I live is so great. Admittedly, there are areas where you wouldn’t walk alone, some parts of the town are scruffy and need modernising, but saying that, there are a few things that I think Leicester should be proud of and I will list some here:

The founder of today’s travel agent created the first package holiday trip in 1841. His name was Thomas Cook. It was a train journey from Leicester to Loughborough. The great central railway in Loughborough is still in operation and is Victorian. I have written a post about this recently with a link attached.

The Hindu festival of light called Diwali is celebrated outside of India in Leicester as the second largest gathering.

In 1485, before the battle of Bosworth, King Richard lll stayed in the Blue Boar Inn, in Leicester. After he was killed in this battle, his body was brought back to the city but his burial place was lost. It was rediscovered beneath a car park in Leicester. After his remains were confirmed as his in 2015, he was reburied at Leicester Cathedral. There is now a visitor centre  established there and you can view his tomb inside the cathedral.

Leicester City Football Club won the Premier League in 2016. This was a massive achievement and the city had a big celebration because of it at Victoria Park. The team were present and the band ‘Kasabian’ performed.

Leicester has a great amount of history, especially Roman. The Jewry Wall Museum contains the ruins of a Roman Bath House. Inside the museum, there are mosaic floors and many relics from the site. http://www.english-heritage.org.uk

Leicester Market is the biggest outdoor covered market in the whole of Europe. The famous Leicester and England Striker ‘Gary Lineker’s’  family still have a stall in this market.

In 1967, Radio Leicester was Britain’s first ever local radio station.

Located on the North side of Leicester is the National Space Centre. It is an educational resource and museum covering the fields of astronomy and space science. http://www.spacecentre.co.uk

Leicester University is famous for inventing genetic fingerprinting. It works in partnership with the National Space Centre in space research and also discovered the tomb of King Richard lll.

In the North West of Leicester lies the public park of Bradgate. It covers 850 acres. It is a medieval deer park and was created in 1500. The ruins of Bradgate house, which is one of the earliest brick-built houses in England can be visited at certain times. It was the home of Lady Jane Grey, Queen of England for 9 days in 1553. There is also a tower you can walk up to which is an 18th-century folly. It truly is a beautiful place to visit and I’ve been to Bradgate about 100 times! http://www.bradgatepark.org

I hope you enjoyed looking at this list. Leicester truly has some great history and lovely old buildings to view. Are you proud of your City?