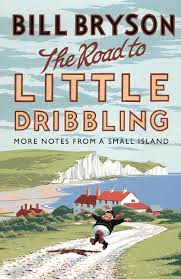 One (and there aren’t many) of my favourite authors is Bill Bryson, a witty funny writer of travel books. I wanted to write a short post this morning about ‘The Road to Little Dribbling’, a revisit of ‘Notes from a Small Island’, in which he wrote about his travels around Britain describing the quirkiness of the people and places, and the way the English get so excited about a cup of tea with a scone and jam. He has a fondness for the eccentricities of the British, and we have many.

‘Little Dribbling’ is Bill’s travels around the country 20 years later, visiting places he’d never been, and ones he had to revisit to see if they had upped their game a bit. Not many have. What I so love about his observations of his adopted country, is his little stories he puts in along the way. His visiting the old preserve of a men’s outfitters in Buxton who offered trousers called ‘Splendestos’, (his new word to use after eating a meal) the wonderfulness of the ‘Fitzwilliam’ Museum in Cambridge, his in-depth descriptions of Wales and how he loved ‘Tenby’. And apart from giving you the basics of the towns or villages hes been to, he also adds those little cracking bits of information about famous people who lived there, and the insignificant ones who should have been recognised in their lifetimes. He’ll visit their homes which may be off the beaten track that nobody knows about. It makes me want to visit these places, far more than any other travel book I’ve read. Oh, and not forgetting his description of the road systems of the UK – the A and B roads – sounds a bit boring, buts it’s a revelation!

It’s funny too. His attempt to pass the British citizenship test, his encounters with rude people who he just wants to hit over the head, and the way he advised the owner of the Indian restaurant he was eating in, The Gandhi, to make it an Elvis themed restaurant and call it ‘Love me Tandoor’; he’d had a few cobras by then.  But then he describes the beauty of ‘The Monsal Trail’ an 8 mile walk from Buxton to Bakewell. A disused railway line that has been restored to a beautiful walk through tunnels, gorges and beautiful countryside.

Bill Bryson has mentioned many times about the way the British over the centuries have given funny and unusual names for towns and villages etc. Little Dribbling being one of them, of which he has called this book, and some of them are quite funny and rude, which he talks about. I’m half way through this book a second time and I really recommend you read it.

PS..A friend of my mum’s rang her the other day and mentioned that her father now lives in a place called ‘Little Snoring’. How cute is that? There is also a place up the road called ‘Great Snoring’. Bill Bryson would like that name, I’m sure.