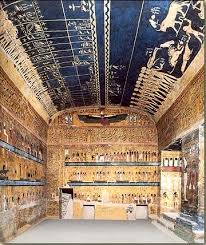 The Tomb of Seti l

When I was 10 years old I was given a book by a family friend called ‘The splendour that was Egypt, by Margaret Murray. She was an Egyptologist, archaeologist and a historian and became the first woman to become appointed as a lecturer in Archaeology in the United Kingdom. She was an authority in her field, excavating temples and being the first woman to unwrap a mummy publicly. Toward the late 19th century, the interest in anything Egyptian was gaining momentum; therefore, she wrote several books aimed at the interests of a more general audience. That’s why I found the one I was given of great interest, as it developed my interest in the subject and introduced me to a description of the Pharaoh, Seti l.

From my earliest memories I can always remember having an interest in anything concerning history, especially Egyptology. I loved reading books about it, watching documentaries and so on. I gained so much knowledge about the subject that I was competent enough to give a speech on the subject for an exam.

So the first place I would like to visit on my bucket list is the tomb of Seti l. He reigned from 1313 to 1292 B.C. and was the father of the well-known pharaoh Rameses II.  Of course,  I want to see the sights of Egypt, the museum of Cairo, Hatshepsut’s temple etc,  but the tomb of Seti l for me is the one that is the most special.

So why his tomb?

Everyone has heard  about the tomb of Tutankhamun, the boy king who’s resting place was discovered by the famous archaeologist Howard Carter in 1922. It was the most significant find up to that point, and has been since,  because everything in the tomb was left intact for 3000 years and was not plundered by tomb robbers.  All the artefacts and treasures had been found as they had been left; secure. That is why Tutankhamun is considered to be the most famous Pharaoh of all.  But actually he was one of the lesser known Pharaohs and died very young. Seti l,  was one of the great Pharoahs whose tomb happened to be the largest that was ever found. Unfortunately, his tomb was plundered not too long after he was buried. How much more would we have to aid us in our knowledge of Egypt if this was not the case. That  is why I would like to visit his tomb especially. 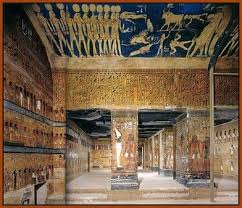 He was venerated primarily because he  re-established order with his son, Rameses ll, due to a previous Pharaoh’s (Akhenatan)  religious reforms. He had many victories in military campaigns and had temples and shrines built for him in his honour. It is said that his reign lasted around 11 years.

Seti’s tomb (KV17) was found in 1817, by Giovanni Belzoni, in the Valley of the Kings. It is the deepest and longest tomb of the New Kingdom. His tomb was the first to feature many colourful paintings that were later found in the tombs of Pharoahs’ that ruled after him. His mummy was found later in 1881, and can be seen at the Cairo museum. His sarcophagus that encased his MUMMY, can be viewed at the Sir John Soane’s museum in London.

There was only a small amount of funerary equipment found inside. Small figures in wood, a paint brush,  a paint pot and the carcass of a bull and some broken jars, but it was the vastness of the tomb that was the most impressive.

As you can see from the tomb layout in the picture, there was more than one corridor and many antechambers and pillared rooms, many of them ornately decorated. If you notice towards the left of the diagram there is a tunnel that archaeologists suggest needs further excavation. 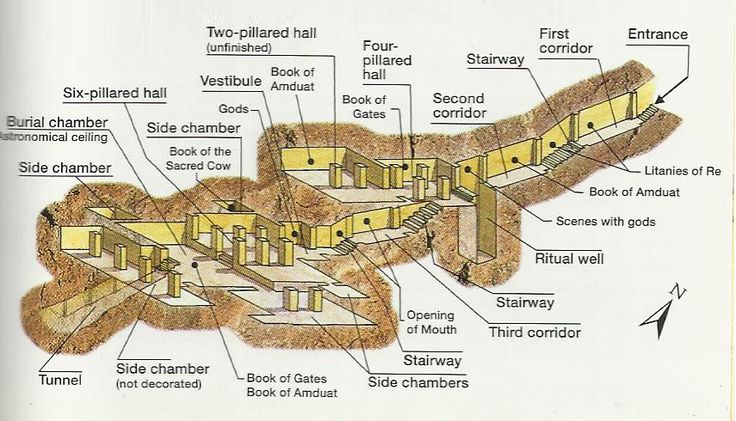 Unfortunately, even though this area is on my bucket list I doubt whether I would ever have the pleasure of a visit. Many of the tombs in the valley of the kings are closed to tourists, which is quite understandable, mainly due to a need for continued preservation.

It still would be lovely to visit just once in my life time though!