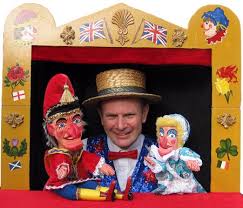 My first experience of seeing a ventriloquist was at the beach as a 5-year-old. I’ll never forget it. A popular seaside show, ‘Punch and  Judy’ involves a ventriloquist putting his hand up the backsides of a pair of silly puppets and trying to make his/her audience laugh by making ‘Punch’, the male, beat the hell out of ‘Judy’, his wife,  with a stick. I could never understand what was so funny about it…it scared the life out of me! That was the day I developed a slight phobia towards anyone using a puppet, whether it’s sitting on their knee and pretending to talk, or the silly bugger with his hand up the back where the sun don’t shine.

To top it off, I think the puppets are totally freaky to look at as well. There was a ventriloquist on the TV years ago, I forget his name, but he had big fat green duck called ‘Orville’ who was about as twee as you could get; I could just about tolerate that one, but the others looked like something out of a horror movie.

Thank goodness you don’t see them as a form of entertainment any more.

HOWEVER…Spit the Dog was a legend!!!

Arrogance towards Waiters and Shop Assistants

I remember going on a date years ago with a guy to a nice restaurant. He started doing that awful demeaning thing to the waiting staff by clicking his fingers to get their attention, I could have knocked him of his chair. Of course, that was the last time I ever saw him.

Have you ever been in a store or restaurant, and overheard a customer have a rant at the staff? I think it’s rude, embarrassing and makes a fool out of the customer, not the server.

A very good friend of mine worked in a shop for a couple of years and she said it was the worst job she ever had.  Every day, customers would insult her. Why do people feel the need to put others down – they’re just earning a living, for goodness sake. If your food is not hot enough, to ask politely for it to be reheated is not a problem, but some people make such an issue out of it. I feel very sorry for staff in these jobs.

Of course, no sensible person would ever insult a waiter – you don’t know what could end up in your food when it comes back!

I know you need this little irritating piece of fabric in your clothes, to give advice on the correct washing temperature, but they are the most uncomfortable things on the planet. Apparently, they have become itchier and longer, adding to the misery. They are longer because of the number of languages that have to be written on them, so that in each country they are sent to, the instructions can be understood. There have been people in higher places calling for the clothing industries to make a peel-off variety. The majority of us cut them off anyway, avoiding the nasty red mark on the back of the neck.

I think these should definitely go into Room 101. Awful, irritating things. 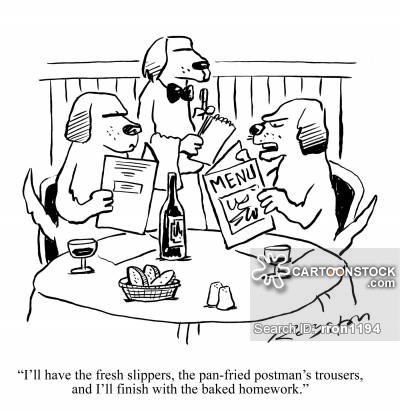 Pompous menus are the funniest and most cringe-making piece of writing you will ever come across. Let me explain:

Years ago, a menu might consist of these straightforward items;

Now, this has become:

As you can see I was exaggerating a little, but do you get my drift?  When I go out for a meal I want to read normal words for food, not poncy words.  I would like to munch on a cheese sandwich with a spread of pickle; I do not want to see what obscure part of the world it was imported from and what pickle it’s festooned with.

If I’m walking down a street and glance at a pretentious food menu in a window, I’ll purposely avoid it like the plague.

My last item is seafood. For some, it is considered a delicacy (goodness knows why), but I cannot abide the stuff. I think it may be due to the fact that once I had a very bad bout of food poisoning from prawns (or similar wretched crustacean), which may have put me of eating these pesky creatures for life. Especially cockles.  And, even more especially, whelks, oysters, mussels etc… What is it with these things –  you are basically eating the whole creature, innards as well.

Fish is fine, I suppose, and is good for you, but I knew someone who would gladly eat the eyes of a fish and think nothing of it. He would also crunch them with gusto to add to the meal time entertainment.

These quivering jelly-like blobs, with their entrails, should be left in the sea where they belong!