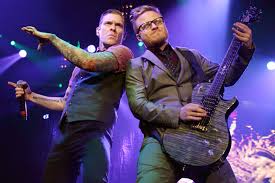 I was listening to one of my rock Cd’s in my car and wanted to share one of the songs with you, actually my top 5. I have a considerable amount of personal favourites, but I’ve included the ones that I first heard and was impressed by.

I was an 80’s child, but I absolutely detest the music from that era. The only bands I enjoyed were The Smiths, who I saw live in Leicester, in 1985 and U2.  I was into the whole Indie thing for a number of years, and then I was introduced to a range of rock bands by my nephew. I thank him from the bottom of my heart.

I like ACDC, Guns & Roses, Aerosmith etc, but its the rock bands and their post-grunge, alternative metal sound that I really go for. The majority of them are American.  I find it hard to describe their rock, it’s not dissimilar to ‘Nirvana’ but more heavy. It has been called Thrash rock.

Anyway my, top 5 in no particular order:

Breaking Benjamin – The Diary of Jane. The wonderful Benjamin Burnley, a flying phobic just like me.  Turn it up very loud  x

Shinedown, Devour: The first Shinedown song I ever heard, a kick-ass song. It has to be on full blast. I will see these tour, it is on my bucket list. Thank you Brett for your amazing voice. x

Evanecence, Bring me to life: These have been around for a long time. A great rock band fronted by Amy Lee x

Linkin Park, Castle of Glass: I enjoy listening to all of Linkin Parks music, but I’ve chosen this one as a favourite. Chester Bennington, an american musician is the front man of the band. A great performer with a wonderful voice.