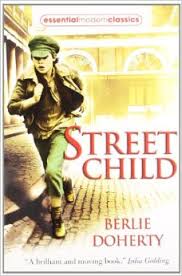 Three years ago I was reading the famous Charles Dickens novel ‘A Christmas Carol’ for an English exam I was taking the following year. He is such a great writer, as he transports you back to the times he was writing about and living in, and ‘A Christmas Carol’ is one of my favourites. My tutor suggested reading additional material, so that we could understand what life was like for the poor that lived in London over 100 years ago. 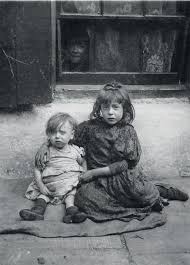 I am writing this post because I would like to talk about the additional novel we were recommended to read. I was not disappointed. It is by an author called Berlie Doherty and is entitled ‘Street Child’. It is a book that can be read by primary school children, but it is a great read for adults also.

What is so fascinating about the book is that it is based on a real boy who lived on the streets of London in the late 1860s, called Jim Jarvis. Not a lot is known about him, but his early life involved his mother, himself and his sisters being evicted from their home and ending up in a workhouse. He was beaten and treated cruelly, but managed to run away. He became a coal lighter with a man and his dog, but endured more physical punishment.  He eventually escaped a second time to live on the streets of London, begging to survive and sleeping on rooftops, until he eventually visited the well-known ‘Dr Barnardo’, who set up the ‘Ragged Schools’ (free schools for orphan children), where he received an education and a roof over his head. 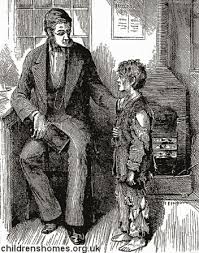 Jim Jarvis told his story to Dr Barnado, who wrote these accounts down, along with other boys stories, in the form of pamphlets to inform the wealthy about the plight of poor children, to help with fund-raising to keep his homes running for the care of the orphans. 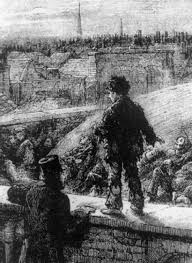 The author of ‘Street Child’ based her story on the life events that could have happened to Jim – his experiences as a coal lighter, living on the streets and how it would have felt for a helpless child alone in an age where there was no sympathy for the poor.

This book is a lovely heart-warming read, because it is based on a real account of Jim’s courage through adversity, and the way Thomas John Barnado brought a system into play to relieve the poor’s plight.

Eventually, Barnardo began to open up homes for girls, too. He died in 1905, but his work became known throughout the world, and many of his homes have survived. The well-known charity, now called Barnardo’s, still exists today to help young people in a variety of ways.

The picture above shows Jim standing on a wall and showing Dr Barnado all the children asleep on the rooftops of London.