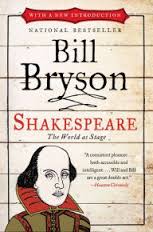 I was watching the programme ‘Antiques Roadshow’ this evening, and an interesting item was discussed; a little booklet written by an anonymous writer during Elizabethan times. It was extremely valuable, mainly because it contemporaneously mentions quotes from many Shakespeare plays; valuable to scholars of the playwright and the times he lived in, as such documents are in short supply.

This in turn made me think about a book I have read more than once, by Bill Bryson, called ‘Shakespeare’. The book emphasises the fact that very little is known about William Shakespeare, what he looked like, his personality or his childhood. Bryson has written a very clever book here, discussing evidence that has been gradually uncovered, to give the reader as complete a picture of the playwright as is currently available. Chapters examine what life was like for people living in England at the time, his lost years, the city of London during Elizabethan times, and the documents that have been found that give evidence of his whereabouts at specific times in his life.

The conclusion describes the heroes of the story, two of Shakespeare’s associates, Henry Condell and John Heminges, who, after Shakespeare’s death, produced the first folios of his work by grouping together all the plays and sonnets so that his work could be enjoyed for centuries to come. Without these two men, most of us might never know who Shakespeare was.

A great read, in Bill Bryson’s entertaining and engaging style, that deals with much of the history and background of 16th century England. Recommended.