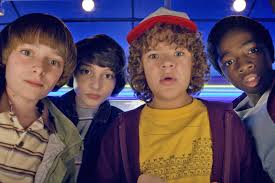 I watched the last episode of season 2 of the American sci-fi series ‘Stranger Things’ the other night and I’m pretty miffed its ended. But season 3 will be available in July 2019, which gives me something to look forward to.

It is set in the fictional town of Hawkins, Indiana in the 1980s.  The first season is mostly about the disappearance of a young boy called Will, who is abducted by a creature from the upside-down world, and then subsequent supernatural forces occur in the town. A girl with psychokinetic abilities  helps the friends of Will and his mum to find him and aid the search. What I loved about the series is the constant references to 80s music, school life and memorabilia from that decade. It has a feeling about it that reminds me of ‘The Goonies’, and it even features one of the child actors from that film playing  ‘Bob Newby’. Joyce’s love interest in season 2. The kids are great characters, with ‘Dustin’ being my favourite.

Season 2 is set one year later when everyone is trying to adjust to life after the events before, yet the aftermath of Will’s disappearance has no let up and there are sinister things still going on. Eleven, the young girl who escaped from Hawkins Lab-she was a human test subject- plays a central part in all of the episodes and her mind controlling abilities are needed in season 2 to end the alien invasion of the town and Will. The upside down world is stronger than ever and poses a threat for the world.

The Duffer brothers developed the series with horror and supernatural elements and used the time frame of the 1980s to create themes representative of that time. The kids characters were so funny. It was charming, nostalgic, scary in places, emotional and addictive.

I don’t want to talk too much about the plot and spoil it for you, if you decide to take a look, but I must confess that I am not a big TV watcher; yet this was so good to the point that I was hooked and couldn’t stop watching one episode after another, a bit like being unable to put down a fantastic book.