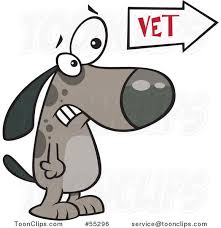 This is a true story.

My dog has been forlorn this week,

Because he’s had a cough.

Yet still his normal sprightly self,

His nose was cold, was eating well,

He ran to fetch his ball.

Played with the cats, ran up the stairs,

He even jumped a wall.

I then became concerned.

Each time he heard a noise outside,

His health it kind of turned.

I took him to the vets today,

He was nervous I could tell.

He tried to jump upon my knees,

He didn’t like the smell ( you know, the disinfectant!)

And I will tell you why.

The barking’s been increasing, so,

We had to stand outside at first,

Advised by vet on phone.

In case he had the kennel cough,

And spread it all aroun’ (use scottish accent, so it rhymes)

He had the checks, his heart, his throat,

She stuck a thermometer up his bum, (completely freaked him out. I think this was the turning point),

He snarled without delay.

I think the visit shocked him,

No meds were thus prescribed.

I took him home, he bounded out,

The car and dashed inside.

Astonishingly then, unbelievably so,

His cough it ceased, yes all at once,

PS… I told him in a strong serious voice. “I am not having anymore of this ‘Tomfoolery’ Dexter”. And then I was glad he was really OK, and gave him a custard cream biscuit. x

2 thoughts on “The Vets”