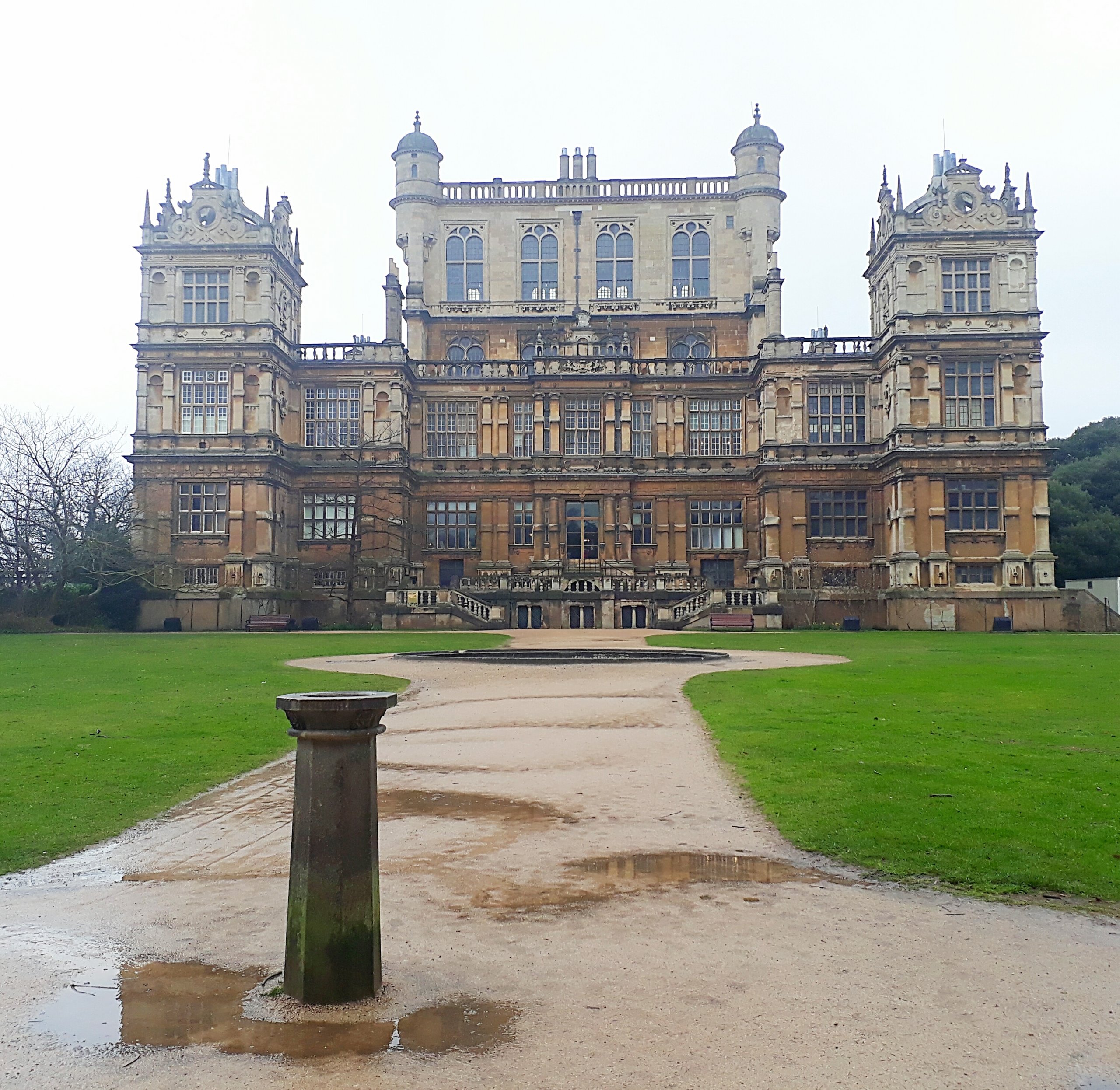 Over the Easter Holidays, I visited ‘Wollaton Hall’ in Nottinghamshire.It was built by Robert Smythson an Elizabethan Architect in 1580. It was updated in 1702 by the Duchess of Chandos with Italian masons employed to make the decorative work on the mansion. In 1801, a fire destroyed the interior of the house, but it was remodelled by Jeffry Wyatville, a well-known designer of gardens and architecture. The Willoughby family, who still owned the house, left, and it was bought by The City of Nottingham in 1924 and opened as a Natural History Museum.

The house is very beautiful to look at and extremely impressive from many vantage points. There’s a short charge for the car park and the house is free to look around, however, I was quite disappointed with the visit. Upon looking around the minimal amount of rooms open to the public, I noticed that in the past, due to a fire, and the families need to sell off everything within the house, it was basically left as a shell when the City of Nottingham purchased it. There seemed to be only a small amount of rooms open to the public which were filled with stuffed animals, as it’s a Natural History Museum, but as a potential viewer of history and anticipating viewing the grandeur of a centuries-old mansion, I was left extremely frustrated. I wanted to view more rooms, even if they were empty, and look at decorative work within, such as ceilings, windows and more staircases etc. There were paintings that were roped off in corridors, so difficult to view from a distance. I would have liked to have seen the different aspects of the grounds from various windows and floors around the mansion, even going up to the top floor, but sadly it was shut off.

Saying that the grounds were wonderful. A beautiful lake to walk around, benches to sit on to take in gorgeous views, cafes and outdoor seating where you can take your dog, even inside. I imagine on a warm sunny day it would be far better because I feel the house hasn’t much to offer. The architecture is impressive to look at and I was unaware that it was used for the ‘Dark Knight Rises’ Batman film.

For a free day out with the kids to look at the museum is well worth it I imagine, and there are contribution boxes in the house. The gardens are lovely too, and extensive. If you’re like me though and want to have a look at the interior I think you may be disappointed. But saying that I applaud the City of Nottingham who created the museum and have taken care of the gardens for the enjoyment of the public.

They obviously took on the house as an empty shell. To then fill it with furniture and paintings to reflect the period was not possible as it wouldn’t have been cost-effective and the funds for such a vast undertaking would have been minimal. That’s my personal view of it anyway, but I could be completely wrong. Nevertheless, the City has done something admirable. Instead of letting the house crumble into disrepair they have used it to create something else for the benefit of the public, and in so doing, have kept the house in its original condition with the care and attention needed given to the gardens. Walking around you can take in the buildings from different angles and it is truly beautiful.

There are also stables and servant quarters, so a guide told me, that contain a few shops and a little museum (additional charge), but once again, you are unable to go inside and take a look at the extensive rooms above. A  real shame; but for a free day out it’s worth a visit.

PS…I apologise for the lighting on the photographs. The day was extremely damp and grey, and some of the rooms inside the house had shutters at the windows. I needed to adjust accordingly x