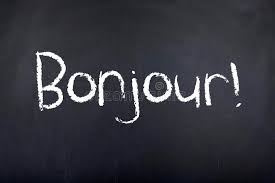 Work was great today, and I am so impressed with the children that I work with. They are all 7 to 8-year-olds and many come from different countries. The class stayed in during break-time because it was raining heavily outside. They usually get to choose a game to play or do some colouring for the 15 minutes before the next morning lesson begins. I can’t quite remember how the conversation started, but one of the children said something in French to his friend. I understood what he said. I said something back in French and he said to me in return, “Miss, do you speak French?”

I answered with “Oui, un peu”. This clever little boy then started reeling out very fast french sentences and I was completely lost. This child, by the way, is from Croatia. His friend that was sitting next to him could understand what he was saying in French, and this little one is from Portugal. I was so impressed.

I’ve noticed this at the schools I’ve worked in over the past few years. Children that arrive from Africa, Eastern Europe, Spain and Italy etc, come into the country with no knowledge of English and in a matter of months are having conversations in English. They become bilingual before you know it and its great to observe.

So it made me think about my language learning. I go to a French class once a week for an hour and a half. I am on level 2 after having completed the beginner’s program the year before. All of us are now studying the grammar part of the language and I must confess I find it very difficult. French, unlike English, has feminine and masculine nouns. This for me, as a native English speaker is incredibly difficult to get my head around. I now understand the concept, yet the problem is remembering which word is masculine and feminine.

Take the word for ‘My’ as one example. In French, depending on what form you’re using, it will change depending on what word comes after it.  It becomes ‘Mon’ if it’s before a masculine word, ‘Ma’ for a feminine word and ‘Mes’ for a plural. This is kind of easy to understand. However, with every word you ever learn in French, you have to learn which form it is and then use the correct ‘Mon, Ma, Mes’ or ‘Ton, Ta, Tes’ or ‘Son, Sa, Ses’. My mind is frazzled with it and boggled to an ultimate degree, and yet people complain that English is difficult to learn.

I may be wrong with my ideas here, but looking at the way children develop their language skills seems to point, through observation, that the more they are surrounded by it, the more it’s absorbed and the quicker they learn. If I spent 6 months living in France and could only speak in French, I imagine I could become quite fluent in 6 months.

If you do happen to be learning French, make sure you get into your head from the outset which words are masculine and feminine. By this I mean that with every noun you learn, make sure you remember whether it’s ‘Le’ or ‘La’ that goes with it, then you won’t have the chore of continually having to look at the dictionary for its form. It will make life easier in the long run.