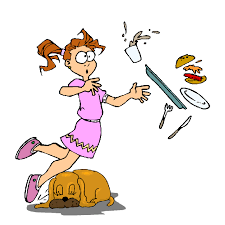 This is no exaggeration, but I have fallen over 4 times in the last 8 weeks. It started to worry me on the third fall as I felt there must be some sort of medical  explanation – I’m losing the plot, some hormonal problem, unexplained (‘idiopathic’…thanks, Dr. House!) giddiness, or my age. I had a discussion about this a few days before Fall Number 4, with my mother, who actually hit the nail on the head and informed me that is was quite simple: “The reason why Pip, is because you don’t look where you’re bloody going!” And she was correct. As I stumbled into the wall during Fall Number 4, I had a quick flashback and realised that, in fact, I didn’t look where I was going.

I checked on the Internet about the number of injuries that are caused by people just falling down a few stairs. One in three over-65’s, per year, have a fall through some sort of identifiable cause; maybe through health reasons, slippery surfaces, menopause problems, and such.

So, the major reason for my falls is because I don’t look where I’m going and I have a problem with the last step. Make of that what you will. Perhaps it’s metaphorical.

I will list my falls, with the most majestic first:

This one involved the last step on my staircase. I was rushing down the stairs to open the door at 7 am. I didn’t switch on the light, which was very silly, misjudged the very last step and stumbled into the table at the bottom of the staircase. I crashed hard into the coffee table and badly bruised my leg and elbow. Oh, it hurt! Did I learn my lesson? Well…

This fall happened three weeks later, before the bruise on my leg had even started to fade. I was walking into a pub (note: into, not out of) with a friend who went straight to the bar. (He is more pragmatic than gallant, I think, but extremely handsome, with a very big ‘heart’, which counts for a lot.) He had navigated the unremarkable terrain without issue. I walked to the left to a table near the window, and once again, missed a small step, falling full-length across the floor in front of six people. They were lovely, helped me up, and calmed me down. To be honest, I didn’t notice any pain at first, as I was so embarrassed and tearful.

After a while I started to notice the pain in my knees and finger. It started to swell. A few days later, with a visit to a pharmacist, I was informed I had bruised the joint and needed a splint to keep it straight with its finger-buddy (by which, neither do I mean a nocturnal contraption or a close friend with skilful digits, but the middle finger of my right hand. Which actually qualifies as both.) It was like a big fat sausage! (insert own joke here.) I honestly thought I’d broken it. Did I learn my lesson this time? Well…

This one happened at work. Just as I was able to start bending my finger, I fell over what you could call a step of sorts, while walking backwards. I work in a nursery at the moment, so there are lots of ‘resources’ everywhere, such as building bricks, books, trains, beads…you name it. I was in a deep discussion with a work colleague, but for some reason I was slowly inching backwards. Before I realised what was happening, I landed hard onto a large tray of building bricks. It really was like a clip from ‘You’ve Been Framed’. The bricks went everywhere and my friend couldn’t stop laughing, which ultimately set me off.

My ‘derriere’ had a big black bruise on it the following morning, and it hurt to sit down for a week. Did I learn my lesson this time? Well…

Just as I was able to sit with a degree of comfort, I had fall number 4, at a local cinema. I was with the same ‘friend’ who had missed the spectacle of Fall Number 2, but he did see this one, vaguely, in the dim light.

I don’t know why some cinemas are still like this, but if they have all the lights off when a film is showing, there are no signs visible, or any form of florescent lighting strip to show you where the steps are. At least, this cinema didn’t have any. I got up from my seat mid-film to visit the ladies room, missed one small step in front of me, stumbled, staggered, and nearly went into the wall. This time, I remained on my feet, but happened to shout out ‘S***!’ in the process. Apparently, a sea of heads all turned in my direction, in unison, illuminated by a brightly-lit dramatic plot twist, followed by mumbles, chuckles and sighs. However, injuries: nil!

Have I learned my lesson this time? YES!

I have had no falls since the cinema episode, because I now look where I’m going. I look for signs for small steps. I hold the hand rails and take my time. I don’t wear shoes with no tread. Observe, observe, observe.

I didn’t sustain any serious injuries – uncomfortable ones, yes, and an interval when it hurt to sit down with perplexing colleagues. But nothing that needed a visit to hospital or time off work. Such foolishness is often rewarded by both, and the older we get, the more serious can be the consequences. Be aware of your surroundings, and take care!

One thought on “My Last 4 Spectacular Falls”